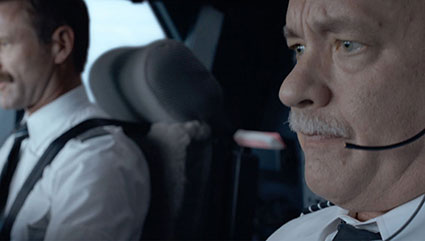 I DON’T believe any regular travellers, or travellers of any kind really, will ever forget those images of the downed American airliner in New York’s Hudson River a few years back.

It was January 2009, a freezing northern hemisphere winter, and Captain Chesley Sullenberger’s twin-engined jet had just been crippled by a bird strike moments after take-off.

Unable to divert the jet back to La Guardia or even to closer New Jersey airfields Sully (Tom Hanks) and first officer Jeff Skiles (Aaron Eckhart) decide to ditch their US Airways plane in the drink.

In the aftermath of the crash Hanks turns in a perfectly stoic performance.

Despite the fact that all 155 people on board emerged alive, there’s all sorts of inquiries during the protracted investigations into the crash landing.

Nor, too, it should be pointed out does Skiles. Director Clint Eastwood saves the high drama of the plane’s evacuation as the water level rises in the main cabin to near the end of his 96-minute movie.

We see flashbacks to the young Sully’s exploits as a trainee pilot, even to some footage of he and some mates piloting military aircraft, before Eastwood focuses on the real drama.

The airliner is down, the stewardesses are directing the terrified passengers to the exits and Sully carries out at least two sweeps of the main cabin, knee deep in water, to verify no one has been left inside.

We’ve seen Hanks in these kinds of roles before. He’s been to World War 2 and back in Saving Private Ryan, outlasted African pirates in Captain Phillips and outsmarted Soviet and East German secret service controllers in Bridge of Spies.

Sully is never thwarted or sidetracked during the film’s denouement, a sort of courtroom drama recapturing the crash and the rescue.

Even the lead investigators on the top table have to accept that in the few moments Sully and Skiles had available to switch to emergency mode their decisions saved everyone on board.

Perhaps the best line in the film comes right at the end.

Asked if he would change anything, Skiles responds “Yes. I’d make it happen in July.”

That month happens to be mid-summer in the northern hemisphere, not mid-winter when the US Airways jet went down in the icy Hudson.

In a nice touch as the credits roll we see footage of the real Sully and his wife at reunions with the passengers and the stewardesses.

We don’t know the passengers’ names. They just introduce themselves by seat numbers: 5B, 10C, 9A and so on.

The real Sully seems more dapper and smiling – happier even – than the stoic Hanks figure.