A look at The Railway Man (M)… 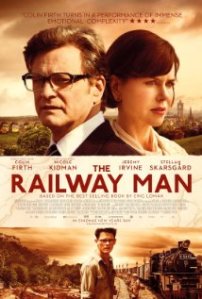 NOT many returning servicemen trying to re-establish their lives back in their home countries were able to speak, let alone write, about their World War 2 experiences.
Eric Lomax (Colin Firth) is a self-contained, somewhat bookish, man who has had a lifelong fascination with trains and all the signalling, engineering and time-tabling infrastructures which go with it.
One day in 1980 he’s in a carriage with fellow-traveller Patti (Nicole Kidman).
While she’s a trifle confused about what connecting train to catch when she alights, this is no problem to Lomax.
He not only advises her about which service to catch next, but the departure time and the platform to wait on.
After the first chance meeting the pair eventually embark on a romance which ends in marriage.
Only then does Patti realize the extent of the damage done to Eric during his imprisonment by the Japanese from 1942 to 1945.
During his most tormented moments he literally witnesses his Kempeitai military police tormentor Nagase (Tannoh Ishida) coming to take him away from the marital home. And back to the hellish Thai-Burma railway construction site.
As a young man Lomax (played by Jeremy Irvine) had confessed to making a radio receiver. The Japanese are convinced it can not only receive signals but send them out, thus revealing to their enemies the location of the railway.
Lomax suffers horrific torture.
Having chanced on some of his memoirs, Patti decides to try and find out more about her new husband’s condition: in today’s language, post-traumatic stress disorder.
In this quest she’s helped a bit by Finlay (Stellan Skarsgard) although Eric’s compatriot only reveals fragments of the horrors of the World War 2 camp.
Finlay does, however, produce a current day newspaper clipping. This reveals that an ageing Nagase (Hiroyuki Sanada) has returned to the scenes of his crimes and is now a tourist guide.
Lomax heads off to Thailand to confront his nemesis armed with a knife Finlay had handed him.
How director Jonathan Teplitzky rounds out the final confrontations between the two protagonists forms the climax to this movie.