FOOTBALL was eagerly awaited as 1920 rolled around with central Victorians trying to put the horrors of the First World War behind them and re-introduce a bit of normality to their lives.

It was a vibrant decade for footy in Bendigo.

The league admitted country clubs, super coach Bob McCaskill arrived and people flocked to big matches at the Upper Reserve with most of their troubles behind them.

The 1919 grand final hadn’t been a high-scoring affair. Indeed, it was a real slug-fest as South Bendigo scraped home by a single point.

The Bloods had finished third at the end of the regular season, but in front of an enormous crowd kicked straighter to edge the re-formed and reborn Sandhurst: South 3.7 (25) to Hurst 2.12 (24).

The grand final was played on a slushy oval. The Upper Reserve was a bog following non-stop downpours in the week leading up to the big day.

Could the Maroons make it a double in 1921? Well, no they couldn’t as South downed Eaglehawk in the grand final.

The 1922 season was notable for the use of the old finals rule. This stated that if the minor premier was beaten in an early final they had the chance to challenge.

Eaglehawk, as the minor premiers in ’22, went down by five points to Sandhurst in the semis.

So another game was required: the grand final, as we know the term today.

The re-match went ahead with the Two Blues successful to take out their first premiership since 1908.

LEAGUE administrators of the period were mindful that if their code was to grow, country clubs were sorely needed.

Expansion was required to ensure the league’s survival.

Rochester re-entered the league in 1923, wearing their famed black and red strip which was to become a feared uniform later in their history.

Rochy had actually first played in the then embryonic BFL in 1915, replacing California Gully. But after a handful of games the war’s drain on the pool of young men was too great and the league went into recess.

With the re-emergence of Rochester, league heavyweights continued correspondence with officials from neighbouring large towns and in 1924 Echuca joined the BFL.

For the first time in a long while the league now had six clubs. Gone was the assurance each April that by September or October there would be a finals spot for your club – with only four involved. 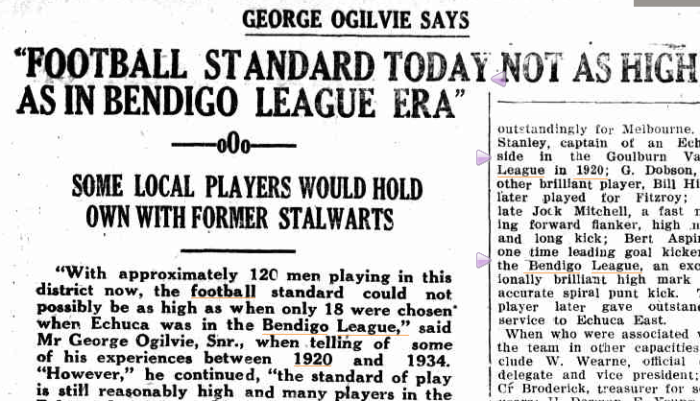 AND the 1924 season was a cracker. Eaglehawk lost just two matches to finish as minor premiers.

Rochester sneaked into fourth spot and drew their first finals game against South. Eaglehawk won the second semi-final by five points and then Rochester won their re-match by three points over the Bloods.

They’d only just taken the lead in the final minutes of the game. Rochy went on to cause one of the upsets of the Twenties by downing Eaglehawk in the final, meaning a re-match had to be played the following weekend.

The final piece of the club structure came in 1925 when Castlemaine joined the league at the expense of Bendigo East.

East first entered the Bendigo Football League — the new name had been adopted only in 1913 – for the 1919 season, straight after World War 1 when footy resumed.

East wore black and white colors and lasted in the league for just six seasons: until the end of 1924. Their first game had been played on season opening day on 3 May 1919.

CASTLEMAINE, outfitted in black and white with a huge capital letter “C” on their guernseys, took just two seasons to snare their first Bendigo premiership.

But 1926 was Castlemaine’s year under the coaching of Bill Walton, a former Collingwood ruckman.

The next season was a memorable one for Bendigo footy.

The combined BFL team had beaten a VFL side on the Upper Reserve with Bob McCaskill – who’d arrived in Bendigo from Richmond in 1926 – starring and Castlemaine’s full-forward Ern Smedley booting seven goals.

The grand final crowd of 14,000 is amazing when you consider that the figure wouldn’t be topped until the 1950s.

The Maine had contested four play-offs in a row for just the 1926 flag. Still, the Twenties remains one of Castlemaine’s boom decades with the four Nicholls brothers playing together in their 1926 premiership team: Charlie, Alex, Percy and Roy.

Alex was the father of Carlton legend, Big John Nicholls although Roy was the longest serving and most injury-free of the brothers with 71 games played for Castlemaine: 1925-1928.

McCASKILL’S era started in earnest in 1929. It was to mark the start of six, successive premierships for the Hurst, a streak which remains a BFL record.

He recruited Morrie DeAraugo (St Kilda) and Alan “Snodger” Arthur (Essendon) in ’29 with Rochester feeling the full effects of the powerful Maroons. Rochy lost a home and away match 4.16 (40) to 17.23 (125) and reigning premiers Echuca were also dispatched at the QEO.

Mid-season Sandhurst suffered three successive losses to Castlemaine (by three points), South and Echuca before McCaskill re-energised his team for the away match at Rochester. The Maroons won by 40 points.

After another mini-slump McCaskill steadied Sandhurst and in the third match for the season between the clubs, Frank Ford booted nine goals in the win over Rochester.

Minor premiers Hurst lost the second semi-final to South but under the Argus system were still alive. The Bloods downed Echuca in the final to set up the grand final – a re-match –  which Sandhurst won comfortably 18.11 to South’s 11.10 to send off popular retiring big man Percy Forbes in fashion.

The Pies lost the second semi-final to Richmond but under the Argus system could challenge and so a grand final between the Tigers and the Magpies seemed on track. Richmond had first to beat Carlton in the final which they did, by one straight kick: 15.7 to 14.7.

Collingwood won the Big Dance by 29 points in front of 63,338 people: 11.13 (79) to the Tigers’ 7.8 (50). As Albert Collier had won the Brownlow Medal and Gordon Coventry the goal-kicking with 124 majors the Pies snared all three major trophies on offer.

[Geelong is the only other club in VFL/AFL history able to repeat the rare treble and did so in 1951: the flag, Bernie Smith’s Brownlow, George Goninon’s goal-kicking trophy.] 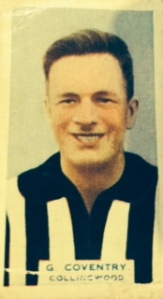 Coventry had set a new VFL goal kicking record in 1929’s Round 13 by booting 16 majors against Hawthorn. This pipped the previous record of 14 set in 1919 by South Melbourne’s Harold Robertson.