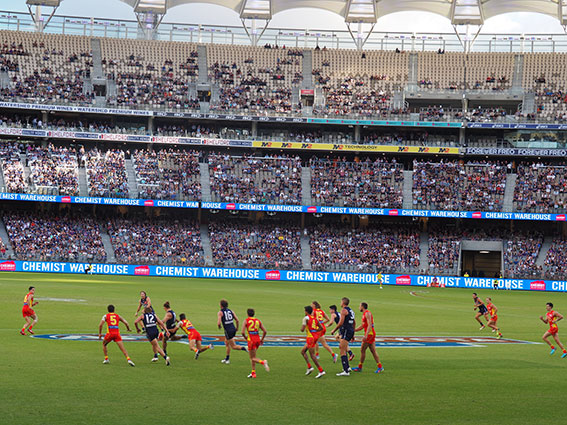 Fremantle’s away game against Gold Coast started half an hour after three of the WAFL games last Saturday. Luckily the match-of-the-round at Fremantle Oval was a late starter so getting to almost one and a half live games was possible. 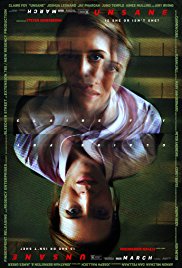 But the day began with a movie – Stephen Soderbergh’s latest Unsane. It’s about a woman named Sawyer Valenti (Claire Foy) who involuntarily voluntarily commits herself into a mental institution. She might have been having trouble with a stalker and he might have turned up on the staff at this hospital place.

There’s a fair bit of farfetchedness in Unsane, filmed on an iPhone 7 Plus, but two things impressed me about the lead character. 1. Her name. I don’t recall coming across Sawyer as a first name before – she got it from her grandfather who died of eye cancer – that was just a joke (the eye cancer bit, one of Sawyer’s jokes). 2. Her incredible bladder control. Tied to her bed. Hours in a padded cell. No need to tinkle. Impressive.

They seem to have turned the music down at Perth Stadium. Hope it wasn’t just because it was an away game and they weren’t bothering to “entertain” us. There were some things that impressed me. 1. The Nathan Fyfe masterclass. Among other things he’s got his leap and float back. 2. Nathan Wilson’s kicking. It’s a work of art. 3. Alex Pearce and what is becoming a very compact and skilful Fremantle defence. 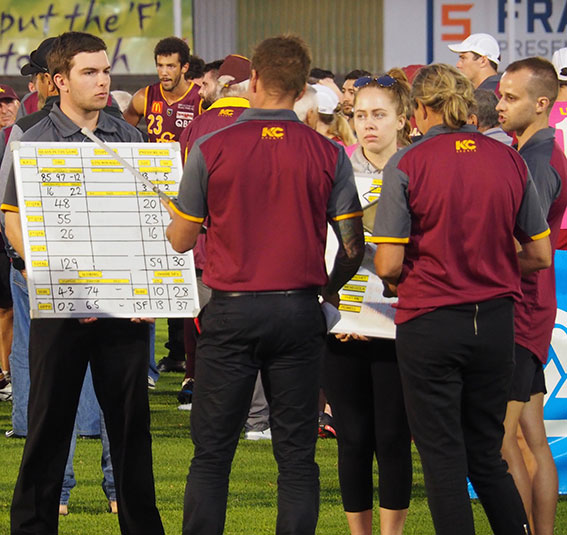 It was tight when I got to Fremantle Oval early in third quarter – Subiaco leading by 12 points. The Bulldogs pressure had been intense after half time and then the dam walls burst. Kyal Horsley and Josh Deluca were relentless in the midfield and a brilliant goal from Horsley was probably the turing point. Ben Sokol moved, marked and kicked well on his way to five second half goals. There was a good battle in the ruck between Zac Clarke, a very important strategic recruit for the Lions, and the lion-hearted Bulldog Brock Higgins. Sandover Medallist Haiden Schloithe began the season in good form. Lions look scary.

You might remember that last week I mentioned East Perth were useless. On Saturday they won the Perth derby by 68 points. Fraser McInnes, one of the few Royals to turn up in round one, was outstanding in the ruck and kicked two goals, Pat McGinnity led from the front and Jacob Brander kicked three goals and looks a prospect. Andrew Strijk was good for the Falcons.

It was a thriller at Bassendean with the home team kicking six goals in the last quarter to beat Peel by 14 points. Thunder ended up with no one on the bench but this was still a promising display by Swan Districts who were without star recruit Rhys Palmer. William Reidy kicked four goals on debut for Swans and Nathan Blakley’s effort against Peel’s well-stocked ruck department was impressive. Darcy Tucker was again Peel’s best player.

They’re tipped to be the bottom two so the game at East Fremantle Oval had real significance. It was close with two late goals by Sean Fletcher helping get the home team home. Perth’s effort was ok. They outscored East Fremantle in the third and fourth quarters and will be reflecting on the 3.8 they managed in the third. Cam Eardley was in hot form for the Sharks, Ambrose Ryan kicked three goals and Matthew Jupp was again good in defence. Corey Yeo and Corey Byrne provided life to the Demons and Cody Ninyette kicked three goals.

In closing let me tell you about something that happened on Sunday. Robert Plant and the Sensational Space Shifters played at Riverside Theatre. It was a wonderful show and I’ve added two names to my list of guitar heroes – Liam Tyson (good footy name that) and Justin Adams. The crowd was appreciative but had some strange elements in it. At one point Plant was introducing a song, talking about the swamp music of Louisiana and Leadbelly when a bloke yelled, “Play some Led Zeppelin!”

“Can someone help that man to the door,” said Plant.

The Zep fan didn’t need help. He just got up and left. He’d had enough. Bugger these artists who play their new stuff. He returned sheepishly a minute later when he realised the song Plant was leading into was Gallows Pole from Led Zeppelin lll. It’s not compulsory to know a little about the background of the music you listen to – but pretty useful if you’re a big mouth. 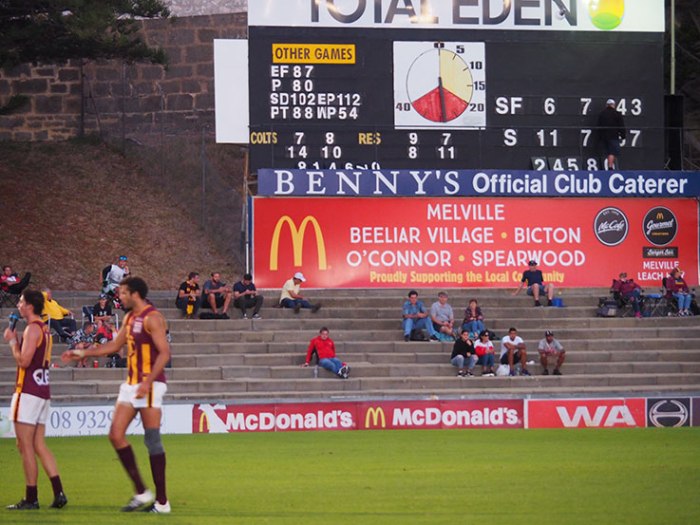 What is and what can never be. The scoreboard tells the story of a game slipping away from South Fremantle.