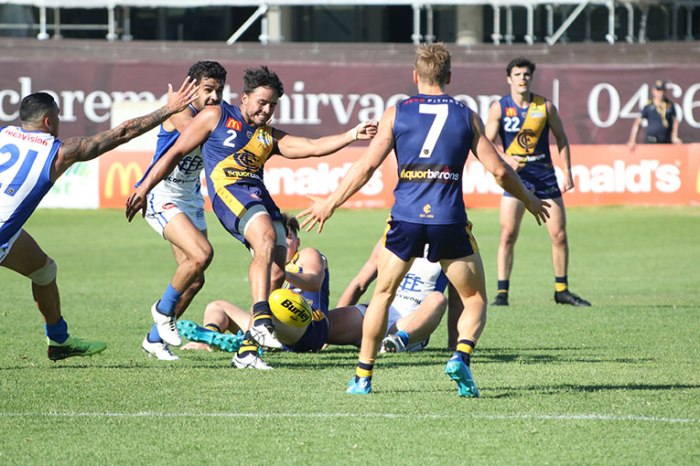 Confidence is a useful commodity in footy. During the third quarter at Claremont on Saturday young Tiger Oliver Eastland was preparing for a shot at goal from 50 metres near the boundary. Experienced defender Keifer Yu cruised past took the handball missed with a flying shot and copped plenty from Sharks fans and players for his audacity.

Tom Lee rises for a crucial mark late in the game at Claremont Oval.

The timekeeper’s finger was poised over the button in the last quarter with East Fremantle leading by two points when Claremont’s Jordan Law picked up a holding the ball free kick about 40 metres from goal – Yu cruised past took the handball and this time slotted the goal. It was the last kick of the game.

The improved Sharks controlled most of the first half with Nick Kommer, Jared Jansen and Cam Eardley in form in the midfield and Jonathan Griffin on top in the ruck. Jack Perham, who is playing with greater purpose than at any time of his 100-game career, kicked four goals and Dylan Winton was good in defence.

Jared Hardisty led the Tiger revival in the second half, Alex Manuel was highly effective with four goals. Ryan Lim was solid in the midfield and Morgan Davies had an interesting afternoon annoying Kommer who, I’m sure, prides himself on being annoying.

The siren has sounded.

The meeting of the unbeaten teams at Leederville started like a blockbuster with Swan Districts 5.2 leading Subiaco 3.3 at quarter time. Swans scored one more goal for the game. The Lions got 18. Kyat Horsely and Josh Deluca again impressed, Brad Stevenson and Ben Sokol each kicked four goals and Hayden Kennedy was brilliant in defence and, is his 39th game, kicked his first league goal. Rhys Palmer kicked two goals and worked hard for Swans.

Up at Joondalup the home team led by 24 points at quarter time but couldn’t hold on. Led by Hayden Schloithe, who kicked four goals including the sealer, South Fremantle displayed a lot of spirit in bringing up their first win of the season. Ashton Hams was at his best and kicked three goals, Nick Suban played his best game as a Bulldog, talented Matthew Parker showed a lot and Ben Saunders kicked three goals. Chris Kuenen was good in the ruck for West Perth, Shane Nelson was busy and Tyler Keitel kicked three goals.

Meanwhile the upset of the round happened down at Rushton Park. Perth stopped still in the last quarter as Peel kicked 5.4 to 0.2 but the Demons had just enough in the bank. Spencer White, once seen as the next big thing, kicked five goals for Perth, Cody Leggett was good again, Michael Sinclair has started the season well and Clint Jones was influential. Taylin Duman was Peel’s best player and an AFL debut is not far off while Leroy Jetta kicked three goals. 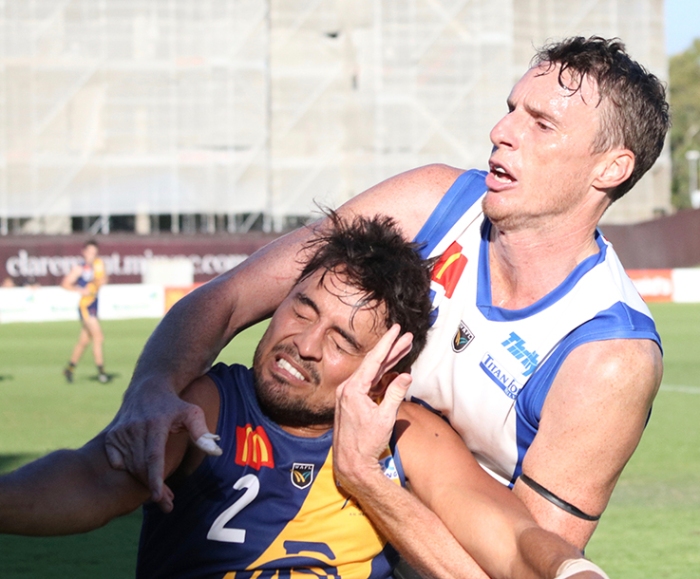