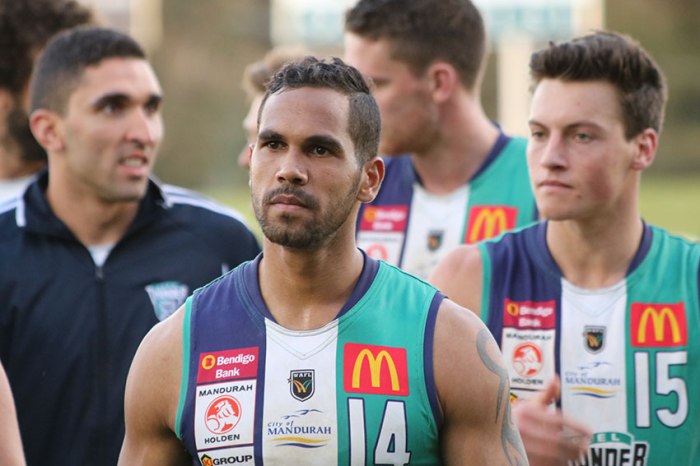 THE question of what happens to players not selected in the senior team each weekend is one that has exercised the minds of the football department at the Dockers and the Eagles since the beginning.

Local recruits have tended to stay at their home club while various ways of allocating interstate recruits to WAFL clubs have been tried including a mini-draft.

A review at the end of the 1997 season sited the lack of a reserves team as the biggest single factor hindering the development of on-field performance at Fremantle. Merging with the South Fremantle Football Club was proposed.

In May 1998 a paper on a Fremantle reserves team was tabled at a board meeting. The problems inherent in the existing system were explained.

• The players often needed to travel large distances to get to games and/or training, especially those listed with West Perth and Peel.

• The players were subjected to varied coaching styles and so did not get to play as they trained.

• The players were being taken out of the club environment.

• The system was particularly difficult for interstate recruits.

The paper stated that the football department would like to relocate all players to Peel for the remainder of the 1998 season and provide Ben Allan as coach.

A host club review conducted for the WAFC by Brian Atkinson, John O’Connell and Alan East after the 1999 season concluded the arrangement was a “… significant and serious impost on the integrity of the WAFL competition.” The system was watered down slightly in 2000 and 2001 with only interstate recruits being required to play for the host club. East Perth, now under Micale, became West Coast’s host club and won consecutive premierships, beating Fremantle’s host club South Fremantle in the 2001 grand final. The system was abandoned in 2002 and East Perth again won the premiership.

By 2012 almost all east coast based AFL clubs were aligned to clubs in second tier competitions. The Dockers and Eagles took a joint case to a reluctant WAFL and after considerable negotiation it was decided that Peel Thunder would be aligned to the Dockers and East Perth would again play host to the Eagles.

In 2013 any Fremantle player assigned to East Perth moved to Peel along with all new interstate recruits. In 2014 the full alignment took over with every Docker having Peel as his WAFL club and the Eagles aligned to East Perth. The Royals made the WAFL grand final in 2014, fielded 11 West Coast listed players and lost to Subiaco.

It is likely Peel’s 2016 grand final team will include 17 players from the Fremantle list. Unlike fully aligned grand final teams of the past – South Fremantle (1999) and East Perth (2014) – the AFL-listed players appear to be committed to the cause and enjoying it. Time will tell. Subiaco have beaten many fully committed opponents in the recent past.