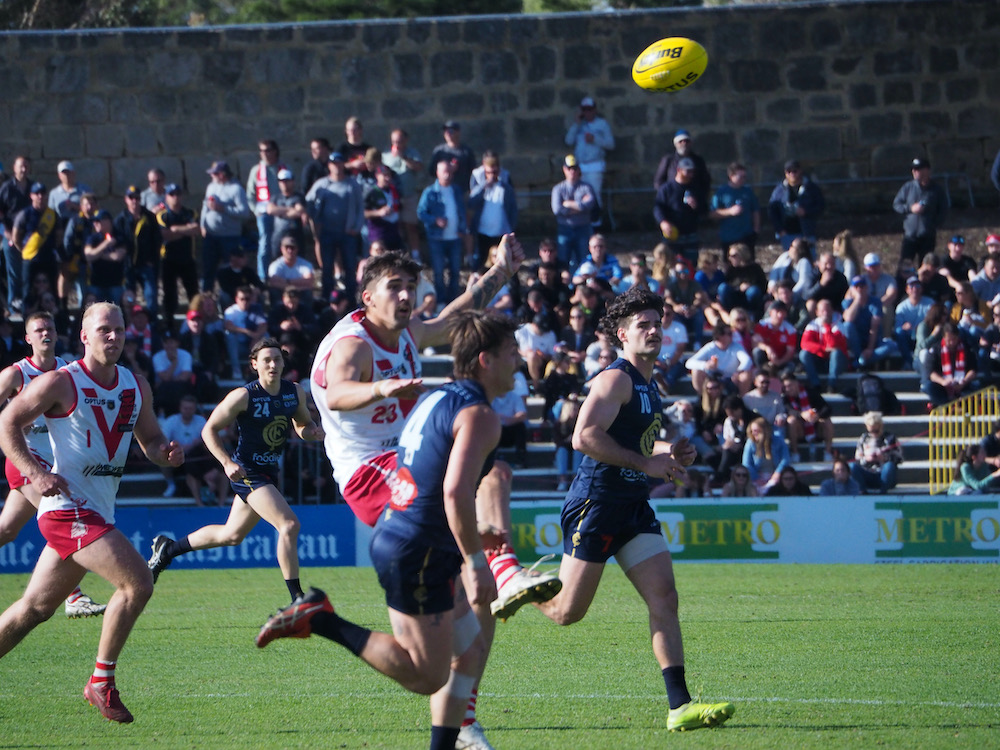 • South Fremantle’s Jimmy Miller gets his kick away. Photos by Les Everett

Turns out I was asked to explain the WAFL preliminary final to quite a few people on Sunday night.

So Claremont didn’t score a goal for three quarters (0.8). Then in the last quarter South Fremantle didn’t score at all while the Tigers slammed through four straight. We were one goal away from another heart-stopper.

I don’t know what these two teams do to each other but not much scoring happens when they meet. This was the lowest scoring preliminary final in WAFL history and conditions were perfect. Luckily I ran into a former WAFL senior coach on the way to the country music gig where I had the explaining to do. He reckons it’s something to do with South’s careful ball movement and lack of surge.

Anyway, I was impressed with Chad Pearson’s game in defence, Haiden Schloithe kicked two goals and held up well in the last quarter, Aiden Hall and Toby McQuilkin did some good things, Zac Strom’s marking was useful and Noah Strom was good in the backline.

Jye Bolton again put in a mighty performance for Claremont that included two last-quarter goals, Ryan Lim was good too. But it was too little too late for the Tigers.

The AFL grand final on Saturday night at Perth Stadium was one of the strangest thrashings I’ve witnessed. Strange because for a while it looked like the Bulldogs were going, “Onwards to victory,” as the South Fremantle song says.

Then Melbourne were magnificent. Frightening. In a game played in the most wonderful spirit at a great stadium in front of footy fans.

While Christian Petracca was a clear Norm Smith Medal choice the efforts of Bayley Fritsch, Christian Salem, Angus Brayshaw, Luke Jackson, Max Gawn and Clayton Oliver among others were worthy of note. And those voting on the award would surely have had the names Marcus Bontempelli and Adam Treloar in the their notebooks before things changed.

One game to go. Subiaco vs South Fremantle at Perth Stadium on Saturday – Bulldogs coach Todd Curley needs to come up with something. It should be interesting.

• Country note: Peter Busher & The Long Rangers at the Mustang Bar were brilliant.