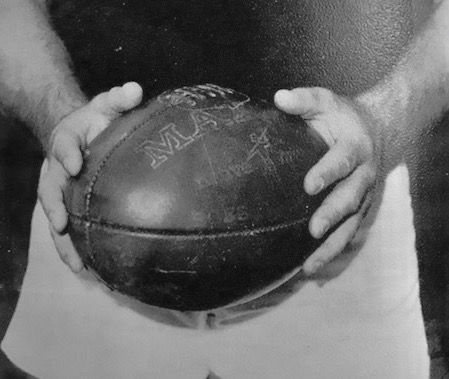 Has there ever been such a curious kick as the reverse torpedo? Does it have a rightful place in footy history, or is it a furphy? Genuine kick or party trick?

The reverse torp, also known as the reverse screw punt or the inside-out torp, is not the checkside or banana kick. You hold the ball back-to-front to a normal torp, and kick it with the in-side of your foot.

You’re trying to create a spiral that, for a right footer, makes the ball go either directly to a nearby team-mate, or arc or curve a fraction from left to right as it finds daylight between the goal posts. Perfect if you’re deep in the wrong pocket. Perfect, that is, if you can ever, ever get it right. “It’s a very exacting kick,” says Malcolm Blight, whose mastery of the conventional torpedo was somewhat prominent in a 17-year career spanning 803 goals for Woodville and North Melbourne.

“You’ve got to kick the reverse torp with the inside of your instep, rather than the outside of your boot, as you do with a typical screwie or torp.

“It’s certainly not a natural kick, and it looks odd coming off the boot. But when it works, it goes okay.”

Blight remembers it being popular during warm-ups, to sharpen the reflexes. “Good for hand-eye co-ordination. We would call it the finger-buster.

“But it was never a real kick in a game. Only ever accidental. It happens when your arm gets knocked  and instead of guiding the ball it drops awkwardly to your boot.”

Geoff Blethyn kicked 343 goals in a ten-year career with Essendon, Claremont and Port Adelaide from 1968 to 1977. One of those goals was a reverse torp.

“I was slung around in a tackle at the MCG against Melbourne one day. I was 20 metres out and purely by accident, the ball went through for a reverse torp goal. Left foot!  I’ve seen the odd reverse torp over the years and they are unintentional. If it was ever kicked deliberately, it was a party trick at training, at best.”

Setanta O’hAilpin, playing for Greater Western Sydney against Carlton in 2012, kicked a goal which the AFL YouTube channel dubbed a ‘classic reverse torp’. Classic in terms of it being a fluke, you could say.

More recently, Collingwood’s Taylor Adams  managed an awkward kick from half-back against Melbourne in Round 12 of this season. “I think we’ll call that a reverse torp,” said the commentators.

And yet the kick has been formally recognised as long ago (or as recently) as the 1960s. In Coaching the Art of Kicking, former Norwood footballer Wally Miller said of the reverse screw punt:

This is a specialist kick, and is mainly used to score goals from deep inside the right forward pocket (for a right foot kick)…Contact [with the ball] is made at about knee height, on the raised inside of the instep (the opposite to a screw punt). The instep must be taut. The kicking action is very deliberate and most players prefer to kick off the back leg…The opportunity to use this type of kick will not occur very often, but if a player has an ambition to become a complete footballer he must strive to master the technique….

Curiously, Miller refers to the reverse screw punt also as ‘the check side punt’ thus blurring the boundary line of definitions.

A more contemporary coaching guide, an AFL guide for primary school children, refers to the reverse torpedo in terms of preparing for a banana kick:

The ball is held like a reverse torpedo punt, with the right hand forward for a right-foot kick and the opposite for a left-foot kick….

Tony Morrissy grew up in Colac kicking what he calls inside-out torps in the backyard and the school playground. “I wasn’t much good at anything else, so I had to try something different! It’s not rocket science.”

A badly-broken leg in Grade Six stymied his junior footy hopes but by the time he was studying at Deakin University in Geelong in the mid-1980s he was dobbing reverse torp goals during midweek student games amongst faculties.

“It would be, say, Commerce v Science, or Arts v Law.  I’d park myself in the forward pocket and just about get knocked over by some of the bullet-like passes to me. There were some good players. Lair-rising was encouraged and lots of players tried the inside-out torp, though not with much luck.

“I’ve never seen the kick at the elite level but I reckon Eddie Betts could probably do the reverse torp with his eyes closed!”

Tony’s sons are keener on soccer than footy so the baton may not be passed on.

But 16 year-old Paddy Wheadon, and his mates from Birregurra, are keeping the kick alive. Captain of the Birregurra Saints Under 15 premiership team in 2019, Paddy taught himself the reverse torp a few years ago after seeing Facebook posts of AFL players doing trick shots.

“I would get bored with drop punts, and I wasn’t that great at normal torpedoes, so I taught myself the reverse torp. If you get a hold of one, it can go a fair distance.” Not that Paddy has ever tried the kick in a game. Or even at training. “The coach is not even that keen on us doing torps, so we keep the reverse torps for kick-to-kick.”

Thank you to Rodger Young for introducing the reverse torp to Sunday morning kick-to-kick sessions at the Fearon, Williamstown.

Coaching the Art of Kicking by Wally Miller.

Setanta O’hAilpin  for GWS May 2012 against Carlton