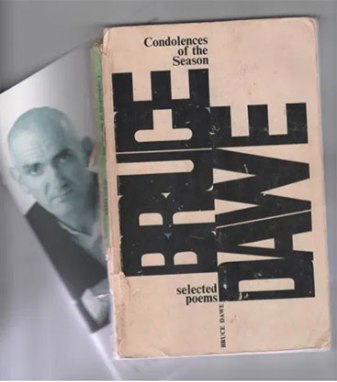 You could call it an illusion, a trick of the stage lighting. Or maybe it was just tiredness that created the moment.

Hamer Hall. October 2001. Paul Kelly is onstage. His grey hair, what little there seems to be of it, is close-cropped. His face appears gaunt, his eyes in shadow. He has looked like this for some years now but it is only at this moment, late in the concert, that for some reason, perhaps merely a blink of my eyes, I think the songwriter bears a passing resemblance to one of Australia’s most popular writers.

As Kelly sings and plays I think of a writer whose collected works have been re-issued many times, whose books have been studied by high school students for at least three decades.

For the rest of the concert my mind is in two places. I’m listening to Kelly’s words and music but I’m also thinking of 1976 when I was introduced to Bruce Dawe’s Condolences of  the season. In that final year of high school I also studied Shakespeare, DH Lawrence, TS Elliot, George Jackson, Alexander Solzenhitsyn, Anton Chekhov and Samuel Beckett. None of their words rang as true as Dawe’s (though Chekhov and Beckett still resonate).

I loved the familiarity of his football poem Life cycle, the tenderness of Katrina and Soliloquy for one dead, the rhythm and anger of the Vietnam War-inspired Homecoming. I scribbled notes all over the wide margins of Condolences.

The book traveled from school-bag to hitch-hiker’s back-pack to the glove-box of my first car. On my wedding day a friend read, Homo Suburbiensis. For an inexperienced poet, Dawe was an inspiration. So many poems so close to home.

So when I stood up to applaud Paul Kelly at that concert I was probably standing up to applaud Bruce Dawe as well. In the weeks after the concert I went looking for common ground between the two writers. I wanted more than the tired blink of an eye to draw them together.

Although I’d seen Kelly play many times I’ve only seen Dawe the once, at a reading at the Carringbush Library in the early 1980s. I asked a question about the writing process and he replied with an analogy about repairing and assembling motorbikes.

But even by then I may have been losing the thread of poetry, despite having a few pieces published (including a tribute to Dawe). I can remember cutting down poems to their bare bones, to the point that there was nothing left on the page. I’d taken brevity, one of the strengths of poetry, to its end point. To a white blankness. What I had thought in my teenage years would sustain me for a lifetime had diminished drastically by my mid-20s.

It was a way of discovering that poetry was not my form after all. I sought the river of short prose rather than the billabong of verse. And hardly ever read Condolences of the season. Except when it mattered most.

It was easier to listen to records and to go see bands, to hear a man singing about St Kilda, the MCG and the Nylex sign. About ‘other people’s houses’, about deeper water. About wintercoats and foggy highways. About bushfires and beaches. About love and sex and desire.

In a filing cabinet in my study there are manila folders marked with names written in black texta. In each folder are newspaper articles I’ve collected of writers, singers, directors: John Clarke, Matthew Condon, Jacques Tati, Rickie Lee Jones, Garrison Keillor. And many more.

In the Bruce Dawe folder I found articles going back to 1980, including black and white photos of a man with little hair and a gaunt face. A 1992 article described Dawe as having “big ears, black-Cornish skull of a face, fierce eyes staring at you from sunken sockets”.

Is this what I thought I saw at Hamer Hall that October night in 2001? Was this the face of a man whose work had once loomed so large in my life, only to have receded with the years?

Reading the Dawe and Kelly folders again I re-learnt that they both: worked odd jobs in their youth, have written in many styles and forms, had their words analysed by academics; and had their careers officially lauded by their peers.

A review of Dawe’s poems could just as easily be a review of Kelly’s songs: “his value lies in his wide interests, his compassion, his sharp eye for the way we so often fall below the best that we could be…”

And vice-versa: “his narrative style is infused with wry observations, bittersweet emotions and enormous appeal…”

These basic similarities should be no great surprise given that Dawe and Kelly are very popular writers. While I was not exactly expecting direct connections, that’s what I was hoping for. Then, in a 1989 Age article for high school students, I find: “Paul Kelly, the rock musician and Australian football devotee, once opened a concert with a reading of Dawe’s poem Life cycle.”   The article was about Dawe, not Kelly, who had yet to become part of the high school curriculum through his book of lyrics Don’t start me talking.

After this discovery I browsed through a 1983 edition of Dawe’s collected poems, Sometimes gladness. I could have looked through my tattered copy of Condolences of  the season but I didn’t want to see my teenage annotations again, my pimples of enthusiasm.  I wanted a fresh start, clean pages. I wanted to imagine Dawe’s work through the music of Paul Kelly. (It seemed to work a few years ago when Billy Bragg and the band Wilco set some Woody Guthrie words to music.)

I had to be patient. You can’t rush the reading of a poem, particularly if you’ve been away from the form for a long time. Slowly I started to hear the poems again, the same poems I first read in 1976. I imagined Kelly creating a stark melody for Homecoming.

I heard him play Prison alphabet as a companion piece to his own How to make gravy, the tale of an inmate writing home at Christmas. I heard him opening and closing Katrina, the touching ode to an infant daughter, with a whispered vocal.

From time to time I remove some of the manila folders in the filing cabinet, making room for my own efforts. I’ve said goodbye to old articles about Graham Greene, Katherine Mansfield, Joyce Carol Oates, Louis Malle, Paul Simon, William Faulkner, Elizabeth Jolley.  If I want to re-discover these people I’ll go straight to the source: the book or the film or the album. There are certain folders, of course, which will not be culled.

Last year I was shifting bookshelves back and forth while painting the hallway. Inevitably I came across Condolences of the season with its torn green spine exposing the binding of the book’s 120 pages. I looked at its cover, with its bold black and white lettering, and tried not to dwell too long, lest the painting never got done.

I still read the book now and then, during those times when I need to be reminded why I started writing, those periods when writing seems if not a waste then at least a dream that never rang true. During those seasons when it looks like the river’s going to run dry.  That’s when I find Condolences in the bookshelf. What was once inspiration becomes salvation. Call it a life cycle.

And Paul Kelly’s CDs? I don’t play them much, but I don’t have to. My teenage daughter, nearing her final year of high school, has been re-introducing me to Kelly’s back catalogue for more than a year now. Call that a life cycle too.

This article first appeared in The Age on 11 August 2007, under the heading The beat of a distant rhythm.