This year has been a good one for crime reading, with some favourite new novels out by Adrian McKinty The Chain, Emma Viskic Darkness for Light, Dave Warner River of Salt, Garry Disher Peace and Jock Serong Preservation. For my Christmas reading, I’m looking forward to cracking into Sticking It to the Man: Revolution and Counterculture in Pulp and Popular Fiction, 1950 to 1980, edited by Andrew Nette & Iain McIntyre, following their earlier pulp collaboration – Girl Gangs, Biker Boys, and Real Cool Cats: Pulp Fiction and Youth Culture, 1950 to 1980. I’ve got a chapter in the new book, but I know I’m going to love the range, research and comment across the whole thing. 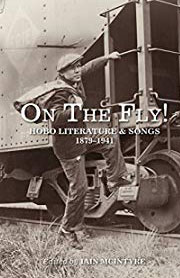 I’m currently reading something else by Iain McIntyre – On the Fly!: Hobo Literature and Songs, 1879–1941, out this year with PM Press. It’s a fascinating collection of Hobo writing – stories, songs, poems and articles by Hobo writers, as well as some sharp analysis about who and what constituted the groups of men and women who rode the roughly 250,000 miles of US train-tracks over some six decades, and why they did it. Puts my father’s favourite Hank Williams song, Ramblin Man, into high-res context.

I’m off next year to live and work on a Sea Shepherd vessel in Equatorial and West Africa, to write about the nexus between organised crime, contract slavery and illegal fishing in the territorial waters of the eight African nations who’ve hired Sea Shepherd as a privateer entity. Sea Shepherd’s role here is to identify IUU (illegal, unreported and unregulated) fishing in these waters and allow local law enforcement to intervene, and where appropriate, to arrest IIU actors.

Two terrific books that canvas a lot of the same material have been extremely useful – Ian Urbina’s Outlaw Ocean, and Catching Thunder: The Story of the World’s Longest Sea Chase by Norwegian journalists Eskil Engdal and Kjetil Sæter (translated into English by Diane Oatley). Urbina worked on Outlaw Ocean for ten years while reporting for the New York Times – covering a range of crimes that took place (and continue to take place) in international waters, enabled by lax administration, official corruption and a general apathy by nations to enforce international treaty obligations. The book is by turns shocking and illuminating.

Sadly, what amounts to modern-day slavery is alive and well on the high seas, as is the pillaging of a rapidly diminishing natural resource important to so much of the earth’s population, by shady and brutal corporations and crime syndicates. Catching Thunder: The Story of the World’s Longest Sea Chase, follows the story of the Sea Shepherd vessel the Bob Barker, under Captain Peter Hammarstedt, which in 2015 hounded the pirate vessel Thunder out of the Southern Ocean, where it and others were engaged in the highly lucrative plunder of toothfish stocks (the Thunder alone is thought to have earned its Galician mafia owners some 80 million dollars in just a few years, drawing up on occasion a million dollars’ worth of fish from its 60 kilometres of nets in a single day.)

The book has an enviable structure for a work of journalism; following the activities on board the Bob Barker and the Thunder in intimate detail with a narrative form whose tension and intrigue is informed by the ongoing chase narrative across several oceans, and which ultimately ended in the deliberate scuttling of the pirate ship – while brilliantly drawing out the background research into the shady dealings and operators across several nations that make pirate fishing so persistent, widespread and lucrative.