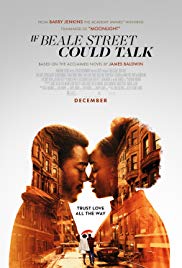 Novelist James Baldwin wrote many a story about the struggles of African Americans in the USA and the oppression, prejudice and wrongful imprisonment which befell them.

Here we’re in Baldwin’s Beale Street in the 1970s. Not the Beale Street of southern USA – the trad. jazz centre of the universe – but Beale Street in Harlem, New York City. Just as happened, and still does, to many young African American men, Fonny, aka Alonzo (Stephan James), has been jailed on a trumped-up rape case. He’d had a life-changing run-in with an edgy, grudge-bearing white cop (Ed Skrein in a terrific and seriously menacing performance) and is convicted of raping a young Puerto Rican woman. He’s only 22 but his 19-year-old fiancee Tish (Kiki Layne) is pregnant so they’re expecting their first child.

While Fonny’s father Frank (Michael Beach) is also helpful but perhaps not to the same extent as Joseph his God-fearing wife (a terrific Aunjanue Ellis) won’t have a bar of the situation.

During a meeting of the two families she even calls God to bring down retribution on the expectant parents.

Undeterred by Fonny’s mother Sharon heads off to Puerto Rico to find the violated woman to try and get her to come forward with the correct description (and name, if possible) of her attacker.

The Puerto Rican isn’t at all helpful and dissolves into hysterics.

So that attempt to exonerate Fonny fails. Interestingly, the two Dads finance their legal bills and the costs of Sharon’s return flight to Puerto Rico with some light-fingered efforts down on the New York docks. They pilfer all sorts of goods and sell them on the black market to other African Americans who aren’t too fussy about where their products come from.

Writer-director Barry Jenkins is meticulous in his attention to detail, including the shots inside the prison.

Tish works at a cosmetic counter in a big city store deep into her pregnancy and here Jenkins is great as he shows us customers’ concern with Tish’s ever-expanding baby bump. She eventually gives birth and the last we see of the ill-fated lovers is a scene in the prison’s family meeting room with Fonny and Tish and their son – he seems to be about five or six – setting about work on his colouring-in book. As Tish mournfully says to camera at one stage during Fonny’s prison term: “Nobody should have to look at somebody they love through glass.”

I couldn’t wax as lyrical about this film as many other movie critics have done. Some gave it five stars out of five. I could only dish out three. The movie was a tad long-winded for me with many, many scenes of the two main characters staring lovingly at each other out on the streets without a word passing between them.

Before Fonny went to prison, of course. There, the only communication through the bullet-proof windows was via the inter-connected telephone handsets.