I used to be a five-day-all-day man but I left live Test cricket behind many years ago. The lure of shade, the digital representation of the WACA scoreboard and a more appealing Australian team led me back this week – a couple of hours on day three and 65 minutes or whatever it was on the final day.

With the crowds as they were you could sit where you liked really – away from the drums and sun. On day five I even managed to be in an exclusive area and watched perched up over the bowler’s arm. Viewing was good from the cheap seats too. Crowds of 20-odd thousand are fine for Tests – spectators need room to move during a whole day at the cricket.

Much as I have loved the WACA in the past I think Tests should stay at Perth Stadium. The views of commentators, executives and experts should not be taken into account when it comes to discussion of the spectator experience. The WACA doesn’t have the shade or facilities to cope with even an 8,000 all-day crowd.

It was a good Test match. I saw much of Virat Kohli’s innings on TV and was intrigued by something – it’s a drive he plays to the off side where he gets down so low that he hits the ball with a cross bat. I don’t think I seen it before except when it’s just some slogger. The Indian captain’s batting is elegant, determined, brutal and brilliant. Some find his “combative” behaviour adds spice to the game. I think it’s a bit embarrassing, the kind of stuff that turned me off the Aussies for so long.

Generally, however, the player behaviour was refreshing. When words were exchanged  there were often smiles… I might even grow to support Australia again.

The Indians are a weird mob. Time after time in Australia they sabotage their own efforts. Yadav was never going to be the answer and his presence just added to the length of the tail. They have some thinking to do as the Boxing Day Test approaches. The openers are shot, they need a spinner, Pant could be a star with the bat and Vihari looks ok too. India needs to win this series – a cooler captain and a harder tail will help.

The shake up in Australian cricket has uncovered a real captain and, in Marcus Harris, an opener of great promise. The attack has been just about faultless and an unexpected morale boosting series win isn’t beyond them either.

Let’s hope for a decent pitch at the MCG – if not it could be time to consider two Tests at Perth Stadium. 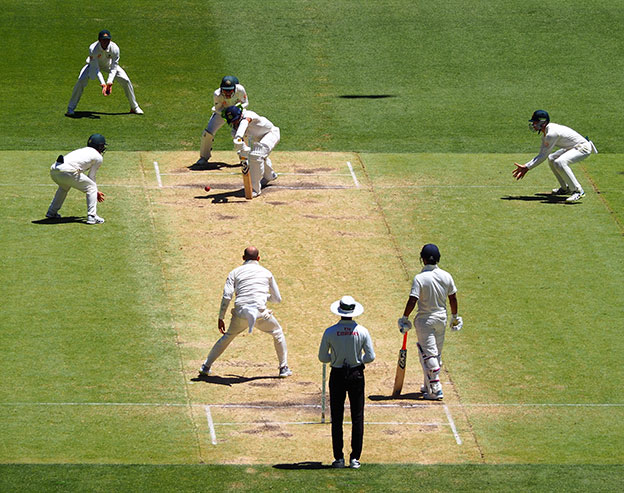 One thought on “Back for the Test”