As we pondered at the start of the finals about who would meet Subiaco in the big one West Perth wasn’t at front of mind. The Falcons slipped right out of mind after South Fremantle beat them by 98 points in the qualifying final.

But footy is a funny game and it’s the quirk of the final-five system that sometimes you have to beat someone twice just to make the grand final. In Sunday’s preliminary final at Fremantle Oval West Perth were too good for a strange bunch of Bulldogs who suffered their third successive loss in the penultimate game of the year.

In the last quarter South scored 3.9 but it was worse than that – missed marks and fumbles spoiled other opportunities – they could have scored 3.13! One of the goals came after the siren fittingly the last kick in the WAFL for Ashton Hams.

Andrew Strijk kicked four goals for West Perth, late inclusion Rudy Riddoch got two and was dangerous, Luke Meadows played with great assurance, Chris Keunen enjoyed an even ruck battle with Brock Higgins and extended his career by a game and the versatility of Michael Lourey  (pictured) was an important factor in the victory.

Brandon Donaldson was best for the Bulldogs, he kicked two goals and often threatened to get his team back into the game, Haiden Schloithe finished the season well and Steven Edwards made mistakes but his enterprise gave the team hope.

The 2018 season club by club in finishing order…

Subiaco: Go into their fourth grand final in a row, this time unbeaten for the season. The recruitment of Zac Clarke has given the Lions what they’ve lacked in recent seasons despite their success – a tall ruckman. The dominant performances of Clarke and Jon Griffen in 2016 and Sean Darcy in 2017 were big factors in the Docker-stacked Peel’s grand final victories over Subiaco in the past two years. They have a stellar midfield led by captain Kyal Horsley (pictured) and Leigh Kitchen, a range of goal scorers and a well organised defence. Lachlan Delahunty enjoyed the freedom provided by Clarke’s arrival.

West Perth: The club went to the receivers but the team found a way into the grand final. The Falcons had the WAFL’s joint leading goal scorers Andrew Strijk (pictured) and Tyler Keitel who each kicked 41 for the season and a midfield that gets the ball a lot. Making it to the last week is a considerable achievement for West Perth, winning the grand final would be a miracle.

South Fremantle: Lost the preliminary final again just when it looked like they were ready to take that long walk into the grand final. Marlion Pickett (pictured) provided plenty of highlights and was highly consistent, Brandon Donaldson made a name for himself, Brock Higgins was inspirational in the ruck and Haiden Schloithe had a good season. The Bulldogs will again be searching for the missing ingredient.

Claremont: Again started slowly and had a lot of close games… three decided by the last kick of the day. Seemed to be on a run towards the end of the year and shaped as the team most likely to trouble Subiaco but the Tigers ran out of puff in the first semi final. Sandover Medal winner Jye Bolton was even better than usual, young ruckman Oliver Eastland showed promise, Claremont found an interesting defender in Dylan Smallwood (pictured), Keifer Yu bowed out in style, Jared Hardisty again showed he’s got what it takes and Anton Hamp was very strong in the back line. 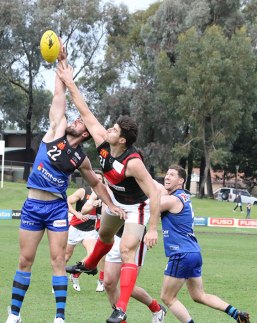 East Perth: The alignment with West Coast is over and the Royals can go back to being a real club. They were hard to follow in more ways than one in 2018 looking potential premiers one week and weak-as the next. Fraser McInnes (pictured) had a really strong year in the ruck and as a forward, Patrick McGinnity looked at home in his dad’s old club and they might have found another ruckman in Ajang Ajang (AJ to the fans).

Peel: Pretty unappealing to watch for the most part. Hindered by an oversupply of Fremantle-listed big men, the Thunder found scoring difficult. Danyle Pearce played with great spirit and style, Traye Bennell was good in defence, Luke Strnadica made important progress, Jordan Boullineau (pictured) was probably the pick of the new locals and Ben Howlett was a good inclusion.

Perth: It really did look like the finals drought was going to break for a while there. Driven by  strong midfielders Clint Jones, Cody Leggett, Corey Yeo and the consistent Michael Sinclair the Demons could compete with anyone… for a while. Michael Bennell (pictured) and Cody Ninyette were dangerous forwards. Perth should go into the off-season with hope.

Swan Districts: A funny season because they were in with a finals chance almost all year without really looking like it. The marvellous Tony Notte was at his best in a variety of roles, Corey Gault looked classy, Rhys Palmer (pictured) was lively particularly early in the year and, as usual, Swans have uncovered some talented youngsters.

East Fremantle: A truly horrible season. The Sharks were regularly belted, won two games and finished with a percentage of 52. Coach Rob Wiley resigned before the end of the season but continued on with his sinking ship, leadership seemed to be an issue and matters got worse when Geoff Valentine accepted the coaching job for 2019 and then changed his mind. Jon Marsh (pictured) was good as a defender and a lot of young players got a taste of senior footy. 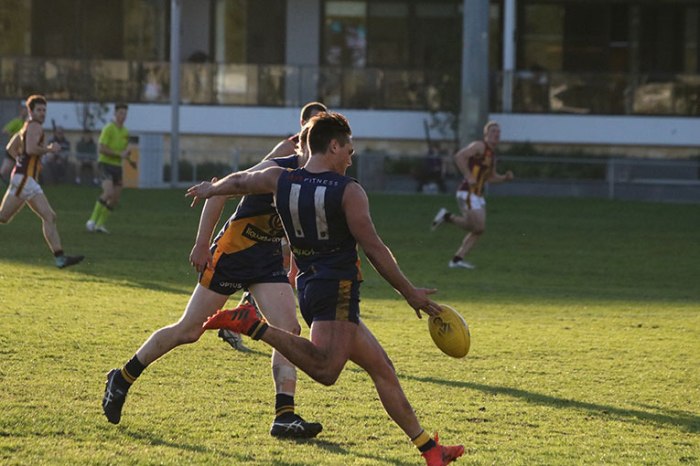