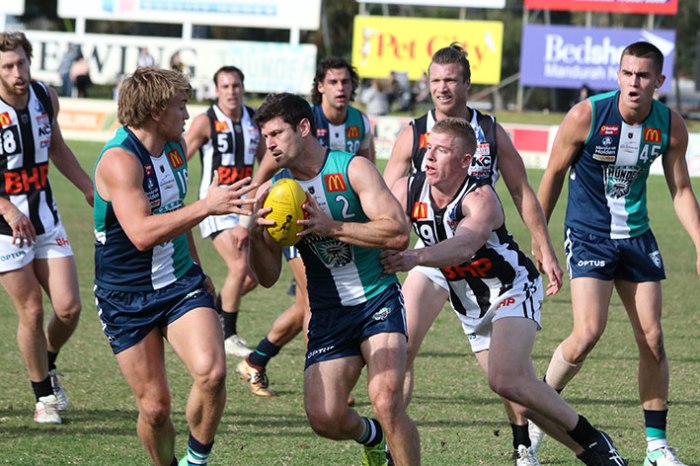 Peel’s Ben Howlett encounters a bit of traffic. All photos by Les Everett.

Down at Rushton Park it was a scrappy game with the breeze playing a part. Peel often threatened to blow it apart and Swan Districts answering most challenges and, in fact, featuring in some of the most attractive passages of play. Brad Hill’s return to footy added interest and he was in it from the opening moments – he ran well, took the game on and generally used the ball well before sitting out the last quarter. Sean Darcy impressed in the ruck and kicked three goals, Taylin Duman was close to the best player on the ground even getting forward to kick a nice goal. Harley Bennell was very lively early but also sat out the last quarter, Danyle Pearce was in everything and Brayden Lawler did a lot of heavy work. Todd Banfield was sensational for Swans – he kicked three goals and showed great pace even running down the speedy Hill in one impressive effort. Matt Riggio was in very good touch and Alex Howard and Tony Notte held up well in defence.

Sean Darcy. He’s likely to return to the AFL next week.

The WAFL went to Geraldton for round 13 and it was looking bad for East Fremantle in their home territory at half time. However the Sharks showed a bit of spark after half time kicking eight goals to Claremont’s four to record an honourable loss. The Tigers were far too slick in the first half. Ian Richardson kicked four goals for Claremont, Lachlan Martinis was busy while Jared Hardisty and Keifer Yu maintained their good form. Cameron Loersch, an important player in the East Fremantle line-up, kicked three goals as did Jack Perham and Nick Kommer led the comeback.

At Fremantle Oval East Perth led the home team by 22 points at quarter time but the Bulldogs gained control with a nine-goal second quarter. Jacob Dragovich, Marlion Pickett, Nick Suban and Haiden Schloithe provided drive in the midfield for South Fremantle while Ashton Hams, Mason Shaw, Ben Saunders and Cory Dell’olio each kicked three goals. Nathan Vardy’s return to form was a good feature of the game, Dom Sheed got plenty of the ball and Will Maginness kicked three goals for the Royals

There was a big crowd at Joondalup and it was tight during the first half. A six-goal third quarter provided Subiaco with a good lead that proved too much for West Perth. Ryan Borchet and Lachlan Delahunty each kicked five goals, McKenzie Lawrence had his best game a league level and Aaron Heal was assured in the back line. Andrew Strijk kicked four goals for the Falcons.

Brad Hill takes off.  Todd Banfield caught him on this occasion.