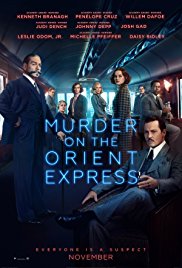 A look at Murder On The Orient Express (M)…

THERE’S no doubt Agatha Christie was the master of the classic whodunit with her murder mystery set on the 1930s luxurious train which travelled from Istanbul to Calais perhaps her most famous.

Johnny Depp complete with facial scars is a rather smooth gangster named Ratchett, stabbed to death in his own sleeping compartment.

As well the scriptwriter Michael Green has added black Dr Arbuthnot (Leslie Odom jnr) just so Poirot – played by Branagh himself – can take the case to ensure the non-white suspect is not made the single scapegoat.

Arbuthnot is the substitute for the English Colonel Arbuthnot from the original novel and subsequent movies.

Just about all of these actors have only cameos, with the exception of the Orient Express line’s director, Poirot’s friend Monsieur Bouc (Tom Bateman).

With the four-carriage Express engulfed by snow and precariously perched on a trestle bridge, Poirot and Bouc hasten to solve the case before the arrival of the Yugoslav police and the rescue snow-plough locomotive.

Michelle Pfeiffer’s man-hungry Caroline Hubbard is perhaps the most fleshed-out character of the suspects.

She’s quite chatty as Poirot tries to nail down where each person was at the time of Ratchett’s murder.

Judi Dench and her ‘companion’ Hildegard Schmidt (Olivia Colman) have only tiny roles. Some critics have labelled many of the top actors in the film as playing only ‘pencil sketches’ but they’re all part of the ensemble cast.

And necessary in my view as Poirot fleshes out just what had happened to Ratchett in his bed. And, most importantly, who did it.

It’s important to note that Christie wrote the novel in 1934. At that time the abduction and murder of famed aviator Charles Lindbergh’s little son was fresh in everyone’s consciousness. That happened in early 1932.

So she’s adapted that storyline, twisted it a little but made it so that Ratchett was the main suspect in a fictionalised plot. He’d fled the US after the kidnap-murder, changed his name and gone to live in Europe.

And Branagh has taken the famed Poirot moustache to extraordinary lengths. Not the immaculately groomed little black lip-warmer of David Suchet in the long-running TV series or the pointy one favoured by Peter Ustinov in his portrayal of the fastidious Belgian detective.

No. Branagh has this bristly extended mo pushing out beyond his cheeks –with an added bottom lip triangle, not quite a goatee –t o give even greater effect.

To prepare for our Crown Casino movie outing I binged on the 1974 Sidney Lumet Murder on the Orient Express shown by 9Gem last Saturday evening.

In bed just as Branagh does, Albert Finney’s Poirot wears a hairnet and a moustache-coveringing facial protector. A rubber band appliance goes around the back of their heads to ensure the moustache appliance doesn’t come adrift in the night.

During the slight commotion during what turns out to be Ratchett’s assassination Poirot (both Finney and Branagh) peer out from their compartment to see a fast-disappearing woman clad in a kimono hot-footing it down the passageway.

Both manifestations of Poirot are wearing their complete sleeping gear.

Of course the Poirot played by David Suchet for 25 years in 70 TV episodes needs no hairnet. He’s going bald and has only the small black curled moustache.

And unlike Suchet, Branagh mutters the famous line about his brain’s “little grey cells” just once during the extended interviews.

In his directorial role Branagh has furnished us with sweeping shots above the stalled train before the camera looks upwards from the base of the massive trestle bridge.

The interior shots use reflections in the numerous mirrors, perhaps to reflect the divided personalities of the travellers.
There are a lot of interrogations as Poirot questions each passenger separately with Monsieur Bouc by his side, ready to trade notes with the famed detective.

At close to two hours it’s a long-ish movie, but that didn’t register with me until later. I’m a bit of a Branagh fan especially for his portrayals of dour, introspective Scandinavian policeman Wallander, so the lengthy interrogations didn’t really bother me.