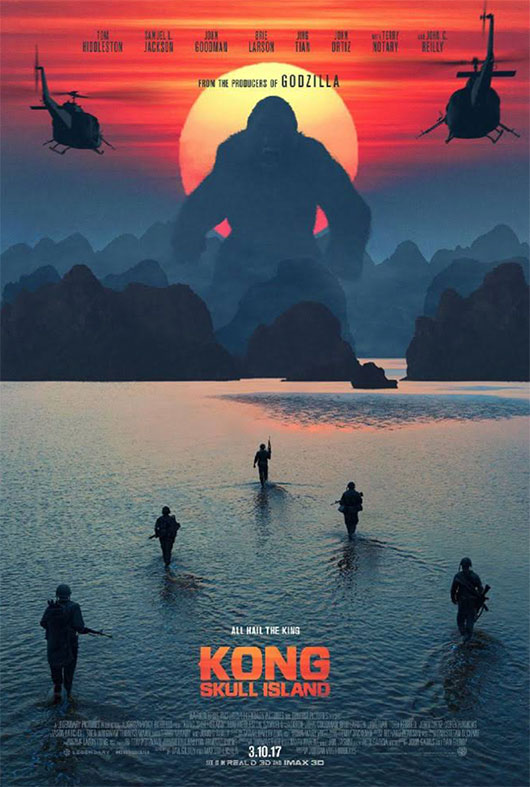 HARD as it is to believe that a remote Pacific Ocean island is still waiting for Westerners to find and land on it, that’s a central premise behind the latest King Kong epic.

Admittedly it’s 1973 and US soldiers are still playing rock and blues music on turntables as our intrepid B-movie bunch of explorers and scientists burst through the all-encompassing fog and mist and land on it.

But let’s return to the back story first. American bureaucrats and fantasists Bill Randa (a now very slimline John Goodman) and geologist Houston Brooks (Corey Hawkins) convince a leading US senator to finance an expedition to the aforesaid unexplored island.

And to ensure adequate pictorial coverage will be attached to their epic adventure photo-journalist Mason Weaver (Brie Larson) comes along to record everything.

So we come to the helicopter gunships breaching the thick mists and crossing into the island’s interior in a classic formation.

Until Kong appears and wrenches the choppers out of the sky. One sequence, in particular, is memorable.

Remember the big gorilla is skyscraper tall. He catches one chopper, swings it around and tears it apart just as a small boy might demolish a toy at home.

Somehow the grounded survivors get through the hugely dangerous ecosystem where fierce beasts emerge from the misty, muddy landscapes as well as from above and below.

After a few scrapes they find themselves at an island native village. The eerily silent Iwi worship Kong as their protector and who should the expedition survivors find among the inscrutable Iwi but another American.

Yep, it’s good ol’ Lieutenant Hank Marlow (John C Reilly) who crash-landed on the island in 1945 along with a Japanese airman.

They were engaged in a hand-to-hand battle on a cliff’s edge before Kong’s massive paws emerged from the gloom on the cliff face and their fight suddenly stopped.

They ended up living amicably among the Iwi, although the American air ace eventually out-lived the Japanese survivor. So he appropriated the samurai sword and dagger.

And wouldn’t you know it but Marlow’s mid-Forties crashed fighter plane can be wrangled into a sort-of river craft, powered by the engine, as Colonel Packard’s boys get to work on it.

There’s a few creatures still to cope with. Conrad uses the sword to despatch medium-sized flying raptors, before Colonel Packard and his crew run into dire trouble amid the burial ground of Kong’s relatives: the skeleton and skull part of the Skull Island title.

Expedition leader Randa is snatched by a raptor, along with a scientist or two clad in hi-vis pale blue tracksuit tops.

But that’s nothing compared with the grand finale: Kong versus the biggest of the lizards. The big bloke’s mortal enemy is not a T-Rex in director Jordan Vogt-Roberts’ movie, but a sort of gigantic goanna with a massive wrap-around tongue.

Amid the battle for supremacy photographer Weaver is knocked semi-conscious into a deep lake. Eventually, after he’s despatched the enormous lizard virtually by dismembering the tongue from the body, Kong’s giant hand reaches down into the watery depths and Weaver is rescued.

It’s hard to recall just who’s left on Marlow’s WW2 plane- cum-boat when they finally reach the north coast – or whatever coast it is where the rescue choppers are due – but if memory serves just a paltry few remain.

Conrad, Weaver and geologist Brooks are survivors. But there’s a lot who just ain’t there!

Footnote: why am I, an avowed anti-fantasy, anti-sci fi, anti-Marvel comics remakes critic, sitting through a Kong movie?

Well it’s my only concession to sci-fi epics. Ever since Fay Wray starred in the very first King Kong epic from the early 1930s -– and I saw it in Geelong in the 1950s – I’ve been hooked on the big lad.

I’ve never been really comfortable on the fixation the various King Kongs have had with leading ladies Wray, Jessica Lange or Naomi Watts down the years, but delighted Kong’s a sort of protector of the human species in each outing.

If all the advance publicity can be believed we’re heading to the ultimate monster movie: a Kong versus Godzilla blockbuster set for a 2020 screening.

And if Tom Hiddleston isn’t installed very, very quickly as the incoming James Bond replacing the ageing Daniel Craig the writers and producers of that long line of spy thrillers will have missed out.