A look at A United Kingdom (PG)

KNOWING how appallingly bigoted southern Africa was in the late forties a film which depicts an inter-racial romance and marriage between a man from Bechuanaland and an Englishwoman might be considered headed for disaster. 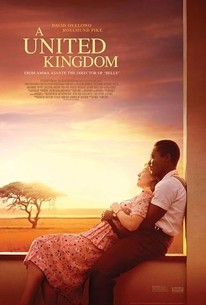 But in fact it’s headed in the opposite direction.

So compelling is the direction from Amma Assante and so convincing the performances from lead actors David Oyelowo and Rosamund Pike that the film rates as my No. 1 pick for 2017, so far.

Oyelowo plays Oxford graduate Seretse Khama who’s the prince of the British protectorate of Bechuanaland (later Botswana) who, when he gets home, will become the King.

It’s 1947 and he meets Lloyd’s of London office girl and typist Ruth Williams (Pike) at a church dance. They both love jazz and blues and pledge to meet at a proper London jazz joint where top notch musicians can be heard.

The romance blossoms much to the delight of Ruth’s sister Muriel (Laura Carmichael) although Ruth is virtually disowned by her father George Williams (Nicholas Lyndhurst of TV’s New Tricks fame) when he finds out.

And on the way home from an outing with Ruth one evening Seretse is set upon by three East London toughs. His Oxford amateur boxing training stands him in good stead as the beaten thugs, full of ‘mouth’ but no action, scatter and slink away.

The deeply in-love couple marry in a private registry office ceremony, return to southern Africa in a good old DC3 (shades of my 1970s days in Papua New Guinea where they were the airline industry’s workhorses) and Seretse’s barren, dry and sparsely populated homeland.

Ruth’s not really accepted by the locals early on and she even – while out shopping – apes the style of young Princess Elizabeth by attempting appallingly misjudged gloved-hand waving. Fortunately, she ditches the hand-wave.

While the locals in Bechuanaland aren’t too thrilled their beloved Seretse has married a white woman back in London members of His Majesty’s Government are terrified that South Africa will view the union as a provocative and left-ist affront on their doorstep.

What if the Saffies up and leave the Commonwealth and take their gold and diamond riches and royalties with them?

The smug civil servants, played very well by Jack Davenport and Tom Felton, do everything as politely as they possibly can to destroy the marriage.

Remember it’s the era when Clement Attlee (Anton Lesser) and his Labour party are in power, with Winston Churchill not re-taking the top job until the early fifties.

So Seretse is summoned back to London but he has the innate good sense to tell Ruth to stay behind. She’d never be granted a passport stamp allowing her to return to Africa once she’d stepped foot back in Great Britain.

It’s a long exile with Ruth pregnant and expecting the couple’s first child.

But Seretse and Ruth have an ally. Remember great old leftie MP Tony Benn? Well, here’s he’s played by Jack Lowden and he pressures Attlee, the Foreign and Home secretaries and the weasely civil service lads played by Davenport and Felton into accepting the union as legal.

And Opposition leader Winston Churchill (who we never see on-screen) also championed Seretse’s cause, although oddly he changed his tune once elected as PM in 1951.

It’s time for Seretse to return to his homeland Benn tells under-pressure Attlee, especially now that Seretse has informed the London authorities that there are diamonds in Bechuanaland’s border territories.

Seretse gets back home a few months after his baby daughter’s birth, makes up with his uncle who’s been acting as the de facto king and regains just about totally the love of his subjects.

It’s a richly rewarding film and tells a story of southern Africa about which I knew practically nothing until seeing it. But since then I’ve swiftly embarked into sweeping on-line searches about the key characters and events portrayed here.

Oh, and if I sound a little bigoted: a disclaimer. I’m a committed Rosamund Pike fan from her early days in TV series such as Midsomer Murders and Foyle’s War to a starring role in the hit 2014 movie, Gone Girl.