My highlights for 2016 were all musical. The major highlight occurred on 20 October in the John Curtin Hotel at the bottom of Lygon Street in Melbourne. I’d seen advertised that the Cactus Blossoms were doing a free gig that night so I dragged the wife and some friends along. The sweet southern harmonies of the brothers from Minnesota had attracted my attention when they released You’re Dreaming earlier this year, and to hear they were doing a free gig surprised the hell out of me. I had to be there. Walking into The Curtin was a trip down memory lane. This is the archetypal student pub where precious little (actually nothing) has been spent updating the place, but I must say the burgers and nachos were exceptional. I was still unconvinced the Cactus Blossoms were actually going to perform for free that night but sure enough, a roadie set up a little area in the corner of the front bar, in walked the two boys, picked up their guitars and proceeded to both charm and mesmerise the entire audience (of about 100 people!).  Absolutely brilliant night. They did two 45 minute sets and in the break I managed to drunkenly ask how come it was free. From what I can gather, the promoter (who I met later in the night – great bloke) had paid them a set amount for the tour rather than per gig, and this was his local pub. I was three sheets to the wind so I may have got that wrong but that is what I think I heard. Anyway, the night was just sublime. The harmonies are made in heaven (very reminiscent of the Everly Brothers) and the relaxed atmosphere resulted in great interaction between band and audience. A truly memorable night. 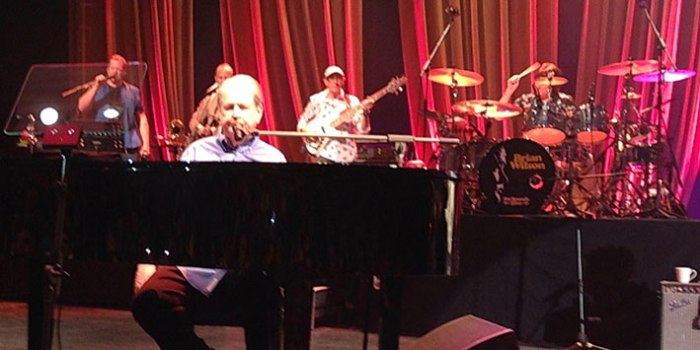 Brian Wilson at the Riverside Theatre in Perth…. note Matt Jardine on the far left doing the high bits. Photo by Les Everett

Other fantastic musical highlights were Gillian Welch and Dave Rawlings at the Perth Concert Hall, Calexico at Hamer Hall, Steve Earle and The Dukes (supported and then accompanied by The Mastersons) at the Astor and Brian Wilson at the Perth Convention Centre. Brian is certainly struggling vocally nowadays but Al Jardine’s son tours with him and does all the tricky vocals, and does them superbly. They did the Pet Sounds album from go to woe and then partied out with a bunch of Beach Boys greatest hits.

Filmwise, 2016 was a bit flat for me. The two standouts were Hunt For The Wilderpeople and Sing Street  but apart from that it all seemed a bit uninspiring to me. I blame myself somewhat for not getting off my arse and seeing more movies (Hell Or High Water has been on my list for months) but I blame Brexit and Donald Trump for that.

One thought on “2016 in Review by Dean Schulze”