WHAT a year of Australian Rules footy we’ve had. Peel Thunder’s first WAFL premiership, the mighty performance of the Westetn Bulldogs – history has been made everywhere. Have you had your fill? Of course you haven’t.

That’s why on Monday 10 October the Australian Society for Sports History (WA) is putting on a big bumper night of footy at the The Game Sports Bar in Northbridge. 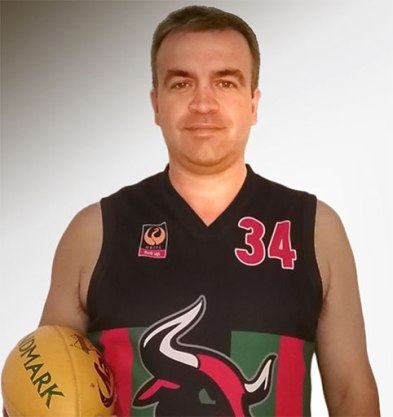 Bouncedown is at 6.30pm with Derek Mott who will tell us about his incredible year of football. Derek has travelled the kind of distances we normally associate with Dennis Cometti, Matthew Pavlich or Alexander Forrest during the 2016 season to play with 17 different teams in 17 different leagues from Esperance in the south or Kununurra in the north. That’s right he played for 17 teams – he notched three goals for the year and missed a couple of easy ones probably due to fatigue.

Not only did Derek play all those games he attended 102 games calling matches all over the place from the Mortlock League to the quirky Onshore League and finishing off with the WAFL grand final. Is he mad? Come along and find out. He’s footy mad, that’s for sure.

After the half time break another historic event – the WA launch of Play On: The hidden history of women’s Australian Rules football by Brunette Lenkic & Rob Hess. Brunette outlined her research in an ASSH address earlier this year under difficult conditions – it was a season highlight – now she’s back with the book.

Play On will be launched by Fremantle Dockers coach Michelle Cowan (pictured during her time as an assistant coach at South Fremantle), a trailblazer in Australian Rules football if ever there was one. Books will be on sale.

The Game Sports Bar in at 90 Aberdeen Street in Northbridge there are full bar facilities and ASSH will provide some nibbles.