Peel pressure too much for Lions

Peel Thunder have won their first WAFL premiership after a tough grand final at Subiaco Oval on Sunday. Peel were in control from the outset but scored four behinds before Subiaco kicked the first goal of the game through Brad Stevenson. However the Thunder midfield was well on top and by quarter time they’d set up a lead of 24 points. A classical winger’s display by Ed Langdon was the highlight of the first quarter.

Subiaco got back into the game, mainly of the back of captain Kyal Horsley, in the second quarter and by half time the margin was just 15 points. Both teams were exerting a high level of pressure and kicks were hard earned. 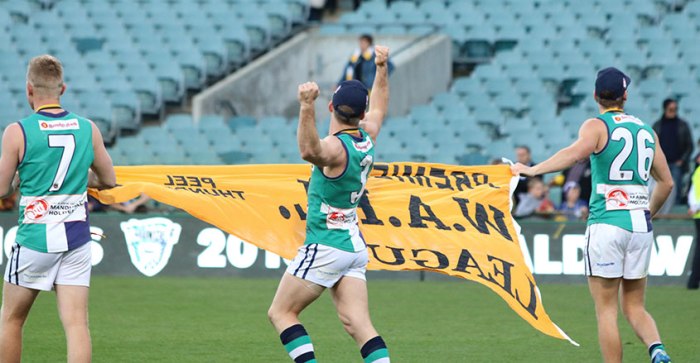 In the third quarter Subiaco dominated for much of the time but the game closed up and scoring opportunities were limited – only seven goal goals were scored after half time. Horsley and Wayde Twomey led a Subi fightback but the Peel defence was strong and the Lions made no gains on the scoreboard. 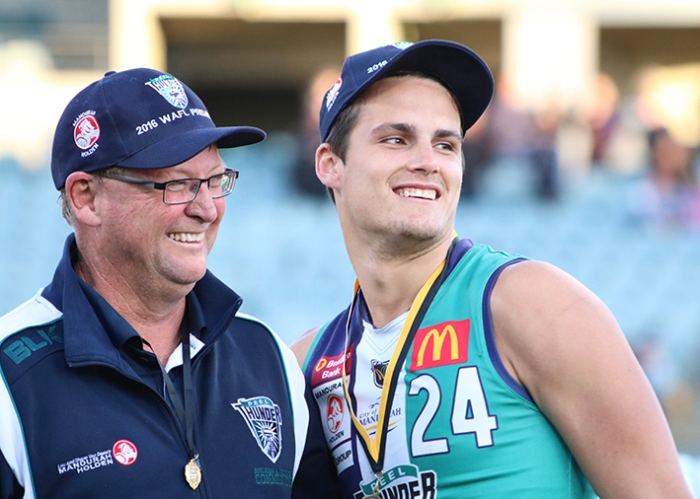 Tendai Mzungu was everywhere early in the last quarter and put an end to any hopes of an unlikely Subiaco victory.

There were many stars in this historic Peel victory. Connor Blakely won the Simpson Medal as best-on-ground after a dominant midfield display capping a brilliant finals series. Another Simpson candidate would have been Shane Yarran who kicked five goals and was the class act of the grand final, as he was for Subiaco last year. In 2015 Yarran was bundled over in the final moments and injured a knee, this year he was knocked out half way through the last quarter and looked dazed during the post match celebrations. Alex Silvagni was superb at full back taking a number of strong marks and  dominating Hamish Shepheard. Ryan Nyhuis won his battle with the dangerous Liam Ryan, Langdon capped a big day with the sealer from the boundary in the last quarter, Matt de Boer was strong as always in the midfield, captain Gerald Ugle kicked three goals, Rory O’Brien battled away, Darcy Tucker used the ball well, Ethan Hughes and Harley Balic impressed with their nimble work, Nick Suban’s long kicking was useful and Zac Clarke dominated the hit outs though it must be pointed out that neither he nor Jonathon Griffin took a mark. Peel’s first premiership coach is Cam Shepherd and it’s also important to mention John Ditchburn

(brother of Ross) who has been coach, president and CEO of Peel Thunder and deserves this moment of glory more than anyone.

Horsley would have been a fitting Simpson Medallist making nearly 40 disposals and kicking two goals, Greg Broughton was lively, Aaron Heal was dependable in defence and drifted forward late and created some opportunities, Twomey and Adam Cockie were solid contributors and Lachlan Delahunty worked hard in the ruck and around the ground.

And so, after 20 seasons, Peel have a premiership. The team included 17 Dockers-listed players and the result will probably lead to changes in the alignment system but for now no one down in Mandurah cares at all. 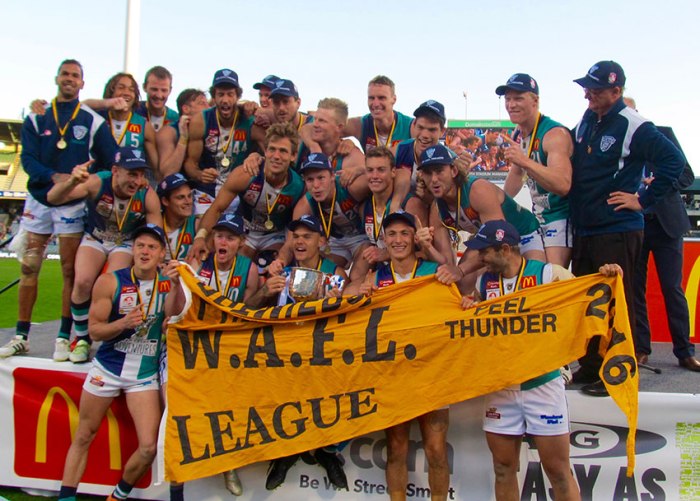