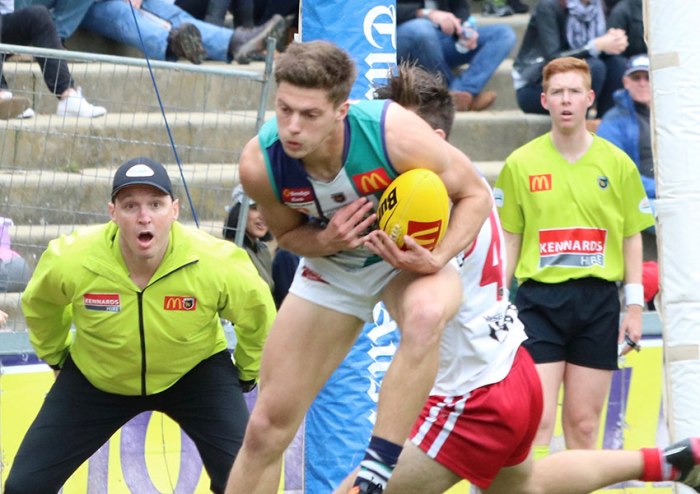 Peel’s Darcy Tucker amazed everyone with this mark close to goal. Photos by Les Everett.

Peel Thunder took control of the preliminary final early and simply didn’t let a plucky South Fremantle back into it. After Peel kicked the first three goals South steadied and by quarter time had got back into the game and the feeling by the first break was that not much damage had been done. However, with their midfield right on top, Thunder scored 5.5 to a point in the second quarter and effectively put the game to bed. Peel’s pressure, dominance at clearances and run were quite irresistible.

Blair Bell slams through a goal.

The Bulldogs fought back int the third quarter and were within reach at the last break but early last quarter goals from Thunder ended the contest. Brilliant late goals from Brock Higgins and Steven Edwards gave the local crowd something to cheer about.

Connor Blakely played the game of his short career winning the ball in close and on the outside and using it well, Matt De Boer was solid again and has worked hard on his kicking, Josh DeLuca put in another polished performance, Harley Balic displayed good evasive skills at half back, Zac Clarke was prominent in the ruck, Tendai Mzungu’s running and ball handling were useful, Rory O’Brien, who kicked two important goals in the second quarter, Nic Suban and Darcy Tucker were also effective in the midfield while Blair Bell kicked two goals in a typically tough performance.

Marlion Pickett gave further evidence of his versatility with good work in defence and he then led the third-quarter fightback when he went into the ruck, Shane Hockey stood up well in the midfield, Jason Maskos had a difficult job in defence and did it well, Tim Kelly did some good things at clearances, Higgins battled away against the odds in the ruck and Edwards kicked three goals.

In the grand final on Sunday Peel will meet Subiaco at Subiaco Oval.