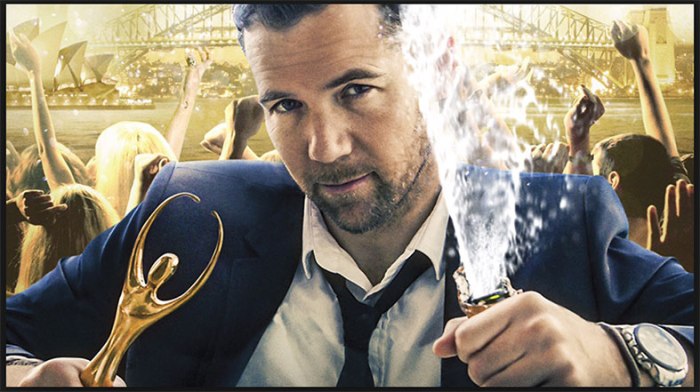 A look at Ruben Guthrie (MA)….

CAN life get any better for high-flying advertising man Ruben Guthrie?

He lives in a mansion on the Sydney harbourside, his fiancee is a model and naturally Ruben (Patrick Brammall) leads a party boy lifestyle.

Model Zoya (Abbey Lee) moved in with Guthrie when she was 16 which probably should have set off some alarms. Right there.

Not to mention a variety of substances which the pair, and their friends, jam up their noses or slip down their throats.

The real drama begins when Ruben’s Mum finds him at the bottom of his infinity pool, the result of some drunken prank.

He’s really lucky to be alive.

Zoya leaves the mansion, issues the ad man a challenge – stay off the booze and the happy substances for a year and you’ll get another chance. Maybe.

So there’s one challenge with the other being the hangers-on, colleagues and so-called friends don’t want to socialise with such a dreary non-drinker.

Director Brendan Cowell keeps tables on Guthrie’s big year over the course of a dozen days or so – day 1, day 31, day 66 and so on.

Damien (Alex Dimitriades) brings some laughs as Ruben’s fast-living friend. They’ve been friends since university days but after he moves in Damien tests Ruben’s resolve with his swags of duty-free booze.

You’ll instantly recognise lead actor Brammall. Not only has he been the main man – a copper, actually – in ABC-TV’s Glitch (filmed in Castlemaine) he was also the husband to the GP who was searching for her revhead-loving family in Upper Middle Bogan.

Jack Thompson and Robyn Nevin play Guthrie’s parents in Cowell’s movie. They’re okay in a movie which is fair, at best, but I have to remark that every time I see Thompson on either the small TV screen or the big silver screen he’s looking more and more grizzled every time.

But then I suppose that’s how many of us now look. To others, anyway.