IF you remember The Intouchables you’re going to love the return of Omar Sy in this new-ish French film. 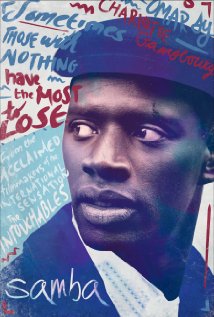 Alice (Charlotte Gainsbourg) decides she wants to do something to assist with the flood of African migrants into her country so she starts volunteering at a migrant detention centre.

Samba Cisse (Sy) has been picked up by police, but he’s not what you’d term a new arrival. Samba’s been in France for a decade working in menial kitchen jobs. He lives with his uncle Lamouna (Youngar Fall) and sends a little money home to Senegal as often as he can.

Alice is brittle and completely disregards a directive from her supervisor. After a bit of instructional advice, she gives Samba her home phone number and after the initial contact it’s not long before she’s entranced by his allure. Samba, of course, despairs of ever getting ahead. He’s deeply afraid of the police and can’t seem to find any meaningful work aside from dish-washing.

Alice is smitten. She steals the baby photo of Samba from his case file at work and puts it in her nightstand at home. Co-directors and writers Eric Toledano and Olivier Nakache have to work hard at resolving all the snags in this cross-cultural romance.

Incidentally, Omar Sy tried his luck in the tough Hollywood market in recent times. Breaking into that scene was made even tougher for Sy as he’s not all that proficient in English. Of course he’s a French speaker so it was back to Paris for the African actor to try his luck once more on tried and tested territory.