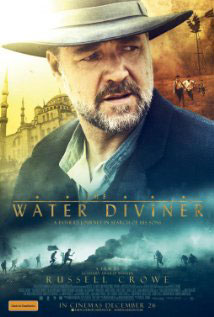 A look at The Water Diviner (M)

IT’S 1919 and Mallee farmer Joshua Connor grieves almost inconsolably over the loss of his three sons at Gallipoli four years earlier.
If Connor (Russell Crowe) is heartbroken his wife (Jacqueline McKenzie) can barely cope with day-to-day activities.
She drowns herself in the dam closest to the farmhouse and after a bit of a confrontation with the parish priest concerning burial of suicide victims in consecrated church land, Connor heads off to Turkey.
He’s completely single-minded in his determination to find his sons’ bodies and bring them home for a proper church burial.
He settles into a small Istanbul hotel on the Asian side of the metropolis where part-owner Ayshe (Olga Kurylenko) is in charge. Connor forms a strong bond with her young son, whose father (and Ayshe’s husband) was also a casualty at Gallipoli.
Eventually, the grieving father sets off on his search and his quest is partly successful thanks to invaluable assistance from two Turkish Gallipoli veterans (Yimaz Erdogan and Cem Yilmaz).
They take Connor and the Australian members of the Imperial War Graves Unit, trying to identify soldiers’ remains, to sites they remember.
Later they’re essential in Connor’s ongoing search as he takes a train through the Anatolian desert only to be shot at and shelled by marauding Greek guerilla soldiers.
This is one section where Crowe as the director could have drawn together an essential storyline thread a bit better. We know there was huge resentment from native Turks about the Greeks occupying prime land in their nation.
And it was only when Kemal Ataturk took power in the Twenties as Turkey’s first-ever president – he’d been Colonel Mustafa Kemal in the Gallipoli campaign – that the Greeks were eventually repatriated.
If there’s one jarring note among the acting ranks it comes with Dan Wylie’s terrible accent as an English officer who denies Connor access to Gallipoli. Anything less Oxbridge is hard to imagine.
Nonetheless, The Water Diviner has set takings records for an Aussie film in the short period since its release on New Year’s Eve so the public has embraced the movie most warmly.
Perhaps Crowe’s finest hour is back in the Mallee, not in Turkey. As a massive desert dust storm rolls in Connor hurtles towards his boys on an exhausted horse.
The trio had lost their bearings after a rabbiting expedition had gone awry.
As the dust begins to envelop everything they all huddle together under a blanket. They calm each other by reciting excerpts from The Arabian Nights, the boys’ favourite night-time bedside story.