SA’s Harry Vick puts on the pressure in the 18s game at Leederville Oval. 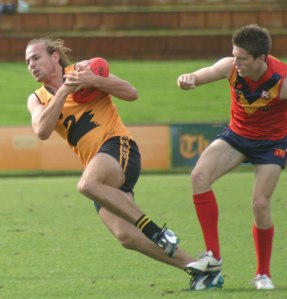 There were high hopes for Western Australia in the 2014 AFL Under -18 Championships but the campaign started poorly and got much worse. WA lost by 31 points to South Australia in the first round and were then absolutely thrashed by Vic Metro at Leederville Oval – WA kicked two goals, none after quarter time, in an 87-point loss.

It was back to Leederville for the home fixture with SA on Saturday and during the first half a few things were evident. The WA boys were determined to put up a better performance but they were not playing very well. SA looked more composed, WA made lots of errors but displayed great spirit.

At times during the second quarter WA looked very disorganised and SA’s Jack Elsworthy seemed to be wandering alone and he caused plenty of trouble. The WA defence held up well.

There was a turning point in the direction and quality of the game during the third quarter when Jarrod Pickett made an incredible pick up and just missed a flying shot for goal. Soon afterwards he took off along the grandstand wing and no one could catch him – his pass found full forward Tyler Keitel. 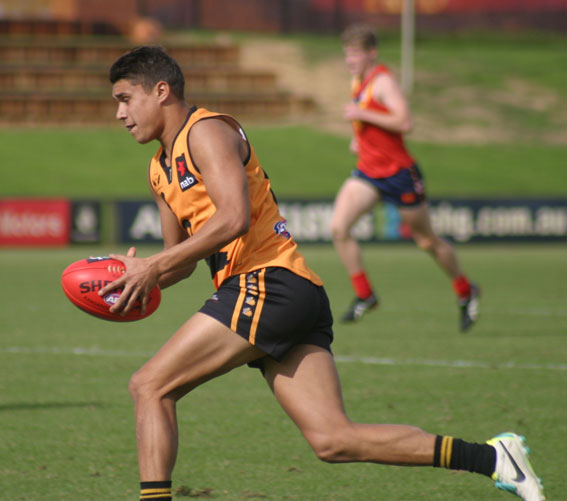 Pickett kicked two brilliant goals in the last quarter but SA again proved too steady and won an exciting encounter by five points.

Pickett was clearly the best player on the ground, Francis Watson was a lifesaver in defence despite a patch of shoddy disposal in the last quarter and Matthew Palfrey provided some good run and drive while Jarad Hardisty, who has the kind of shape that would make talent spotters wince, and Harrison Court were real hard-at-it goers for WA.