East Fremantle’s Brandon Ellis gets his hands to the ball in a marking contest.

Peel are beginning to look like the best three-quarter team in the WAFL. The Thunder jumped the home team at East Fremantle Oval on Saturday and two Colin Sylvia goals early in the last quarter won them back the lead they’d lost late in the third. However as the last quarter progressed the Sharks pulled Peel apart. As expected Mark McGough and Rory O’Brien gave East Fremantle plenty of midfield power, Ryan Lester-Smith, Brett Peake and the impressive Jayden Schofield each kicked three goals and Jack Perham kicked two important last-quarter goals.
Anthony Morabito was the best player on the ground and kicked three goals to complement his strong midfield and defensive work, Hayden Crozier used the ball well and kicked two goals, midfielder Jacob Ballard worked hard and Alex Pearce is an impressive tall and quick defender. 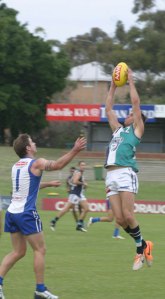 A trip to Bassendean is not what you’d wish for when your form is shaky but it turned out perfectly for Subiaco. In a highly entertaining game the Lions led Swans all day and powered away in the last half. Shane Yarran did some amazing things in Subi’s forward line and finished with four goals as did Matt Boland, Kyal Horsley was a constant presence in the midfield and Clancy Wheeler played an important role in the win.
Swan Districts played some very good footy and couldn’t have asked for more from star forwards Ryan Davis (five goals), Tim Geappen (four) and Ricky Cary (three). Matt Riggio was an effective midfielder.

At Lathlain Park the Royals put away the Demons with a 10-goal second quarter. Callum Sinclair kicked six goals for East Perth, Freddie Clutterbuck ran all day, Dom Sheed looked good and Kyle Anderson put in another strong effort in the back line.
Joel Houghton and Nick Kane tried hard for the Demons and Gerald Ugle kicked three goals

At the Showgrounds West Perth didn’t score a goal in the last quarter but fell in by nine points over the improved Claremont. Andrew Strijk was clearly the best player on the ground, Jay Van Berlo had another good game and the speedy Kris Shannon kicked a couple of handy goals.
Young defenders Hugo Breakey and Jordan McAllister impressed for the Tigers along with the consistent Luke Blackwell.