The Bulldogs are back and after losing their first four games are hovering just outside the top four. At Fremantle Oval on Saturday South led all day against Claremont and brushed the Tigers aside in the second half. Dylan Ross gave South Fremantle really clever run from defence and used the ball well, Ashton Hams also kicked well to set things up; Ryan Cook was excellent in the midfield, especially in the first half; Brock Higgins marked well; Ben Saunders kicked four goals and Josh Pullman was a good target in attack. Jacob Martinez continued his good form and Adam Guglielmana was another good defender.

Luke Brackwell worked very hard in the midfield for Claremont and Aaron Holt was a bold running defender. 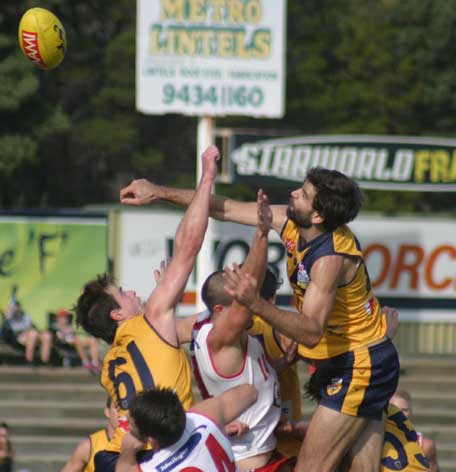 In the clash of the top two at Leederville Oval the wooden spoon favourites proved far too good (the wooden spoon market may have been adjusted). The rise of Swan Districts is the story of the season so far and reflects the whole-club approach of the black and whites. Small forward Matt Jukes kicked six goals for Swans, Graham Jetta was lively in defence, Tallen Ames made sure his 200th game was a good one and Matt Rogers continues to be a wholehearted performer.

Subiaco trailed by three points at three quarter time and went down by 43. Shane Yarran kicked three goals for the Lions, Kyal Horsley was back to his best and Jamie Bristow put in his usual performance.

East Perth had put East Fremantle to bed by three quarter time – but didn’t quite tuck them in. In the last quarter the Royals scored a point and the Sharks 6.5. The result was an unsatisfying 10-point victory. Brendan Lee made a welcome and effective return to the team, Sharrod Wellingham was outstanding in the midfield as was Steven Payne.

Peel scored four goals in the third quarter and six for the game at home in yet another very disappointing performance. Perth were more consistent and retain their spot in the four. Paul Bevan’s experience was invaluable for the Demons, Cale Morton has another good game as did Dene White.

Peel must be very pleased Brendan Jones decided to stay on, Matt Brown battled hard and Jacob Ballard had another good game.

South’s Haiden Schloitte was heavily tagged on Saturday but slipped forward to take this mark in the last quarter. Photo by Les Everett