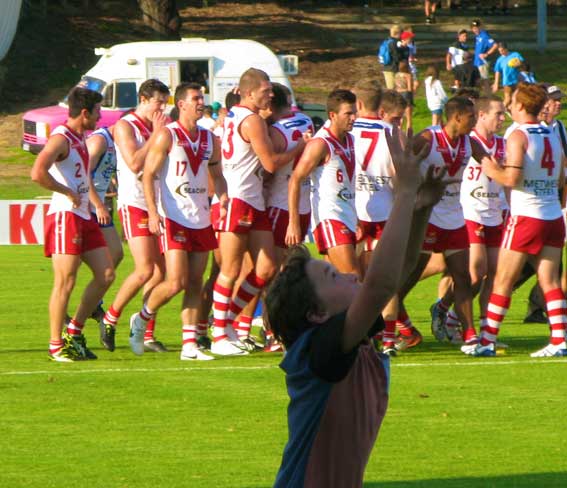 A young fan gets into his half time kick to kick while the pumped up Bulldogs head for the rooms. Photo by Les Everett.

THE Anzac Day games attracted pretty good crowds (about 3,500 each) and it remains difficult to pick a winner in the WAFL. The only constant is that Peel can’t win. And speaking of picking winners, Swan Districts, the popular pick for the wooden spoon, are now sitting in second place on the ladder.

In the Fremantle derby at East Fremantle Oval on Anzac Day the visitors opened up a big early lead and pulled away after a late Shark challenge to win by 17 points. Haiden Schloithe, dropped off the Fremantle rookie list at the end of the last year, continued his remarkable recent form and kicking four goals, captain Ryan Cook was brilliant in the midfield and Brock Higgins put in another good game. Jamie McNamara ran hard for East Fremantle and Matthew Jupp impressed. 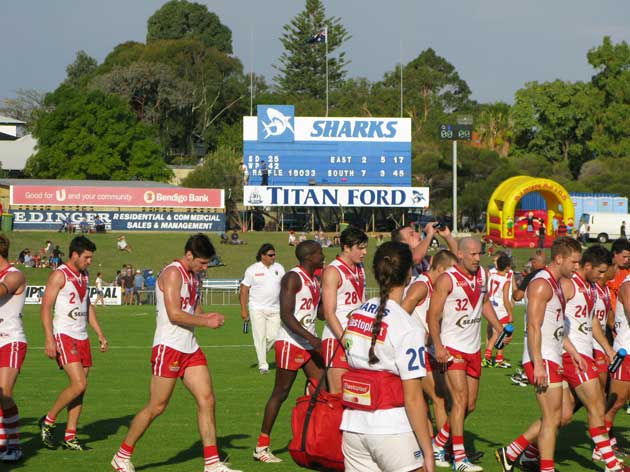 The blue and white scoreboard tells a red and white story at half time in the derby. Photo by Les Everett.

East Perth returned to winning form and looked more organised than in recent weeks in beating Perth by 22 points at Leederville Oval. Sam Butler was outstanding for the Royals, Ash Smith kicked three goals and Nathan Blee performed strongly. Cale Morton was effective for the Demons while Matthew Moody kicked four goals in the first quarter and was then shut out of the game.

In their first game at their temporary new home at the Showgrounds, Claremont led all day in a spirited victory over Peel. Ryan Neates played with great energy, Jack Bradshaw kicked three goals and made things happen and Jack Richardson was also a lively player. Anthony Morabito was classy in the midfield for Peel, Matt Tabener took 13 marks and kicked three goals and Craig Moller kicked four goals.