• South win another close one. Photos by Les Everett

The first week of WAFL finals couldn’t have been much better. Great weather, very good crowds and exciting games.

The Tigers got out to a 30-point lead early in the third quarter before South began the long march back. Matthew Parker, released by Richmond for a return to the WAFL, kicked two goals and was active in the third quarter comeback while a snap late in the last quarter by Brandon Donaldson gave his team the lead.

The drama didn’t end there with Claremont captain Jared Hardisty taking a set shot for goal after the final siren with his team two points down. He missed.

Hardisty was superb for the Tigers, kicking brilliantly, until that last one, and laying 16 tackles. Dylan Smallwood kept Mason Shaw quiet while Jye Bolton and Bailey Rogers kept things rocking. 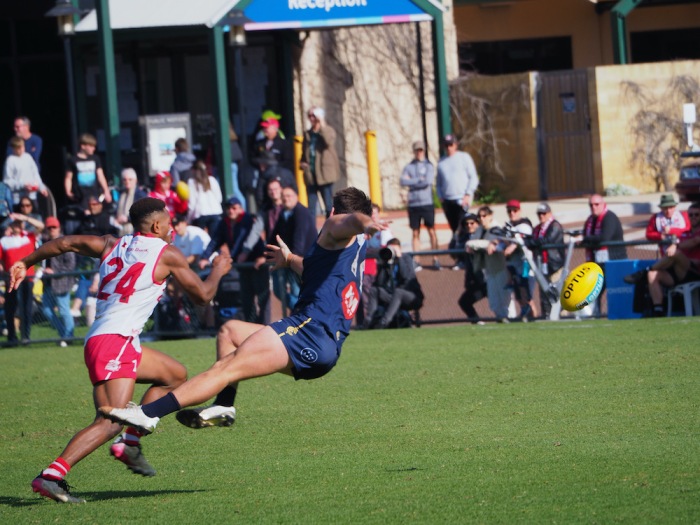 Up at Joondalup on Sunday we had another thriller. Swan Districts led at each break but West Perth took control early in the last and appeared set for comfortable enough victory. But Swans kept coming and when a hobbling Lewis Jetta slotted a set shot from 50 the visitors were two points ahead. Then with two minutes to go Mitch Antonio (who had missed two earlier set shots) got another opportunity. He kicked it.

I thought Aidan Clarke was the best for Swans, he ran hard and used the ball well. Young ruckman Matthew Germs was impressive, Jesse Palmer kicked four goals and Brandon Erceg was resolute in defence. There was a turning point when Frank Anderson’s knee buckled as he turned to pursue a loose ball late in the last quarter – it might have cost his team the game and probably cost him the chance to make his way onto an AFL list.