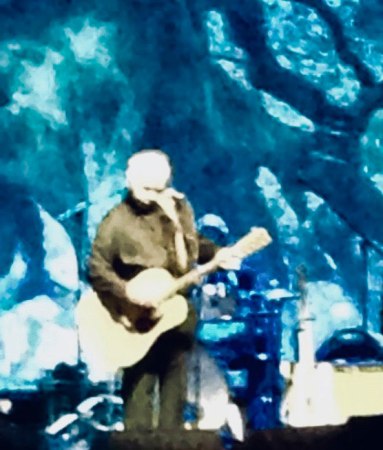 I’m devastated. John Prine’s death has hit me hard. It’s funny how we relate to musical artists, follow their lives vicariously through their songs, concerts and in this time, our connection to them through social media. So, when a favourite passes it feels like a family member has died. Prince hit me hard. Maybe it was his age. David Bowie too. Joe Strummer, Johnny Cash (huge sigh as I type) and Slim Dusty.

I can remember exactly where I was when I heard that John Lennon died. That was traumatic. I was doing work experience in 1977 when Elvis died. The first major jarring I felt for an artist on their death. I was working at a garage. I walked into the garage to find the mechanic sitting inside the bonnet of a car, head in his hands, shoulders slumped, sobbing. I went into the office and the boss explained that Elvis was dead. Oh, boy.

John Prine’s death was hard to accept. Not since Merle Haggard died, four years ago, almost to the day of John Prine, have I been so shaken. I know why and I don’t know why. We want our musical heroes to stay with us forever. They are bigger than us in so many ways and yet familiar in a way that we reckon we could have a beer with him next time he comes through. When the door shuts on that next time it slams shut in our heart. No new album, no new YouTube clips, no more existential ideas wrapped up in ordinary stories to contemplate, no more concerts.

John Prine was due to tour, performing at the Palais next week. The tour was cancelled in February following a health scare in Europe in January. He promised he would reschedule for 2021 and that was good enough. We could wait. His Tree of Forgiveness concert last year was one of those up in the stratosphere level gigs. Like, out of this world. So, we could wait, knowing he would bring us our world in a way that only he could perceive it. A world we could recognise, that we had been living in. John Prine would take that ordinary and mundane world of ours, put it into his magician’s hat and presto, we would be looking at Donald and Lydia’s big old goofy world moving at the speed of the sound of loneliness and in spite of ourselves our boundless love would move us to say, hello in there.

My daughter Mercedes interrupted a Zoom meeting I was in on Wednesday to whisper with sadness in her eyes that John Prine had died. I could barely comprehend the message. But I couldn’t leave the meeting. Thirty minutes later I was on Twitter trying to find out what happened. Trying to understand. That his death was a result of complications due to the coronavirus made it even harder to comprehend. Several days later and it is still more unreal than real. Maybe it’s because we are living in such uncertain, unfathomable, unreal times. Maybe it’s because he was only 73 and I’m on my 58th lap around the sun. Maybe it’s because when a loved one goes everything sucks. That’s it. Everything sucks.

So, for what it’s worth, and maybe this is really just for me, here a couple of thoughts as they have come to me about the passing of John Prine.

I can’t remember exactly when I came to John Prine. It was sometime in the 80s. A close friend, Polly Coufos was our touchstone music encyclopedia. He had over a thousand records by the time he was twenty. Loved pretty much every genre you could name (maybe not so enamoured of jazz and hair metal). I think the first record he bought was Led Zeppelin, when he was nine. We met at teacher’s college, shared houses through the 80s. We spent our twenties, with good friends like Brett and Matty Q, Paddy and Neil and many others, playing records from lunchtime until the wee hours, drinking beer and seeing who could tell the biggest lies.

Country music was our go to. John Prine featured but at first, only as one of the many great artists we were coming to, thanks to Polly’s record collection.

The song that first drew my into his orbit was Grandpa was a Carpenter (who “voted for Eisenhower ’cause Lincoln won the war”) from the Nitty Gritty Dirt Band’s 1989’s Will the Circle Be Unbroken collaboration album. That got the wheels going. When John Prine released The Missing Years in 1991 I was sold. As with any crazy-eyed fan, new to an artist who had already released nine albums, I threw myself into his river and I swam. Nine albums, almost every one of them with five-star reviews.

That is John Prine’s legacy. Up until his death, with over 150 songs, he had a strike rate with the critics to match the very best. Johnny Cash has said, “I don’t listen to music much at the farm, unless I’m going into songwriting mode and looking for inspiration. Then I’ll put on something by the writers I’ve admired and used for years – Rodney Crowell, John Prine, Guy Clark, and the late Steve Goodman are my Big Four”. And if we used Leonard Cohen’s Tower of Song as the gauge I’m pretty sure John Prine would be on one of the higher levels.

There’s any number of songs that each one of us will go to as our favourite in John Prine’s catalogue. I don’t have a favourite. There are just so many damned good ones. So many. But I do want to talk about Angel from Montgomery. In the early 90s I toured a one-man theatre show about Hamlet to high schools. The play was very well received and there were always plenty of questions following the show. One question came up often. What was it about Shakespeare’s writing that made him so much better than his contemporaries or any other writer in the 400 years since? Well, as an example, consider the monologue… what a piece of work is man. Write up what you think it is about. On average it would take at least two pages. Truth be told, you could complete a PhD on that monologue. Shakespeare took about 12 lines.

So it is with Angel from Montgomery. Specifically, the last verse:

The song itself, told in the woman’s voice chronicles a relationship that starts out full of hope and drive and sexual hunger (If dreams were lightning, thunder were desire/This old house would have burnt down a long time ago). By the third verse, about 12 lines later there’s flies in the kitchen. She is in a stupor, the relationship is dying on the line and a tension pervades every word. I have heard this song a hundred times and thought about it ten times more. I marvel at his perceptiveness, considering he would have been in his early 20s when he conjured it. I marvel at its raw honesty, its longing and its respect for both characters. Mostly I marvel at the last two lines. A devastatingly powerful observation. As with Shakespeare and the best of writers whatever the form of their expression, what sets them apart is how they can capture a universal idea in such an intimate, personal tale.

When our daughter Madeline turned 18 we threw her a party, a small gathering of family and close friends. I gave the speech. It turned on an idea that celebrated her character. I chose a John Prine song to emphasis this point. I chose You Got Gold. The chorus of this lesser known John Prine song is, for me, a sentiment that beholds a person’s innate majestical character, a statement of what they are and what they can be. And we wanted Maddy to hear that as she stepped into adulthood. As she becomes who she is, in her right. The chorus is simple but strikingly evocative.

Cause you got gold
Gold inside of you

His words, not as poetry but as lyrics are so moving in their conversational tone, their melodic, and easy on the ear intonation. Their resonance is their power. Our daughter Maddy is a beautiful, spirited, confident young woman. She is smart and funny (she has a wit that could wither the best) and sensitive and kind. But she is also a young woman in a society more designed for how males might make their way than females. And as we all might well remember, from 18 to 28 is a terrifying time, with land mines littered across the green fields you want to dance across. We wanted to tell her that she’s going be alright, notwithstanding the blows and shocks she will have to absorb. In You Got Gold by John Prine we found the perfect way to articulate what we wanted to say to a young person on the verge of adulthood. Trust yourself, because you’ve got gold inside you.

In 2018 my sister Jo died. I flew to Perth to be with my brothers and sisters and to grieve this tragic moment. It was, to put it mildly, an awful time. Our daughter Mercedes flew into Perth and I picked her up from the airport. I was not in a good place emotionally and I was trying to centre myself. I explained to Mercedes how I was feeling and that also I had errands to run so we would be driving around Perth for the day. She went with the flow.

There was a song I had latched onto that helped ease the burning hole of nothingness in my heart. It didn’t change things such as they were but it gave me some comfort. When we got in the car at the airport I told Mercedes that unfortunately she would have to put up with me playing a particular song over and over again as it was my lamp in this hour of darkness. She went with me on this journey and she was my second lamp. The song was Summer’s End by John Prine.

I broke into tears pretty much every time the chorus came on and we might have played the song 20 times. That’s a lot of tears. But, as you know, a sad song to accompany you through a tough time is worth its weight in gold. The tears might flow but simultaneously a strength is building. I didn’t recognise it at the time such was my shock but John Prine’s Summer’s End gave me the strength to hang in there through one of the most terrible and terrifying times of my life. And thankfully, I had Mercedes, not as a passenger but as an anchor.

I don’t know how to take this essay to its logical conclusion. So I won’t. I will leave the last words to Jed Hilly, Executive Director, Americana Music Association:

John Prine was our pied piper, our revered monk, our soothsayer. What John said, went. He had this magical way of making everyone around him feel special, whether you knew him personally or not. He could share his extraordinary being on such a personal level that fans felt like they knew him. He was their friend, their personal special find, their treasure. He was the most humble, kind, funny and real soul on the planet.