Cometh the moment cometh the woman. 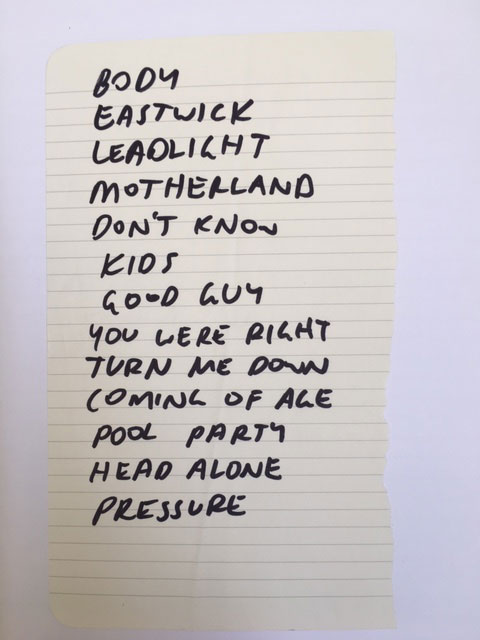 Jacklin walks onto the stage full of low key alt-country and indi-pop in swagger.  This is day one of her world tour and  her sophomore album CRUSHING is due for release tomorrow. That’s a lot to swagger about.

She starts with BODY. No song about a relationship with a man baby has ever sounded so good. But every man in the audience is cringing vicariously through the protagonist’s woeful behaviour. Jacklin’s voice backed by the band wraps a warm velvet blanket of sound around every woman in the audience. She  at first protects but ultimately empowers. She flicks the bird towards all man babies.

The next couple of songs are from Jacklin’s first album DON’T LET THE KIDS WIN. LEADLIGHT and MOTHERLAND showcase Jacklin’s beautiful voice and poignant lyrics questioning her and our place in life as we grow older. DON’T  KNOW HOW TO KEEP LOVING YOU is a glorious song about the moments of decision and indecision that occur as a relationship breakdowns. Something so catastrophic has never sounded so beautiful. There are no dry eyes in the audience.

(Fast foreword to October 2019 and Jacklin and band are recorded live in Seattle Washington USA and have a similar effect on KEXP radio announcer Sheryl Waters https://youtu.be/qY6tkOOBE3M ).

Maybe it’s too much for the band because they leave just Jacklin alone on the stage for her stripped back classic DON’T LET THE KIDS WIN. Jacklin is made of stern stuff . TURN ME DOWN sees her band back for more excruciating heartbreak. However unlike the  album recording where she collapsed to the floor emotionally spent, here she is still standing at the end. Not so most of the audience.

She ends with HEAD ALONE. A song that bleeds like a fresh cut on an already shinned and exposed body. At the beginning she pleads for emotional and physical space in a claustrophobic relationship before giving her voice full octave to demand and take what she needs. There is no resistance possible to such a powerful cathartic release . The audience have been through the Jacklin emotional wringer and she senses its cringe as she takes the stage for an encore. She immediately lightens things up with “This is our signature party tune “ in her introduction to

PRESSURE TO PARTY. The dancing that ensues goes some way to healing the damage she has inflicted onto the audience.