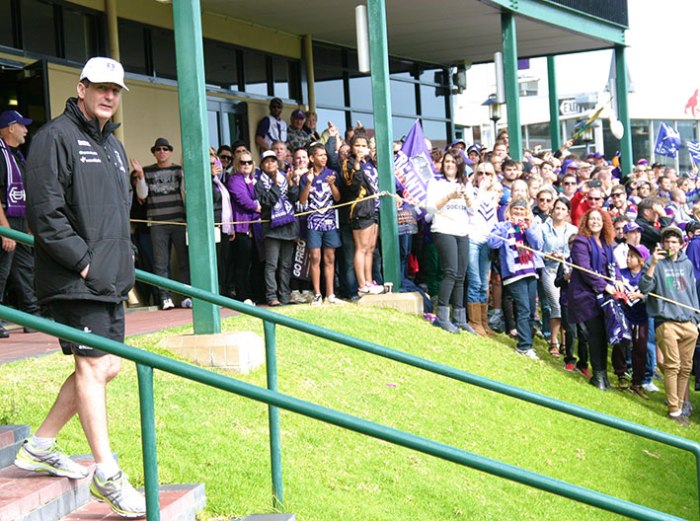 Ross Lyon at Fremantle Oval prior to the 2013 grand final. Photo by Les Everett.

I almost made a big call on a recent Saturday night. Cold and miserable as I left Perth Stadium half way through the last quarter of the Fremantle-Essendon game I questioned whether I really wanted to do it any more. Watching the Dockers had become a chore.

It seems the Fremantle Football Club board members were feeling the same.

Ross Lyon’s sudden departure was not quite as dramatic as his sudden arrival but it did come after a similarly injury ravaged season and it again involved CEO Steve Rosich.

The players didn’t know what hit them when Lyon came along but they soon became believers. Chris Connolly had brought some success but the players wanted to be allowed to play and not to be too focussed on the opposition – and they let him know. Mark Harvey won derbies and could both inspire and confuse the players.

Lyon brought clarity and confidence. He seemed to know what he was doing. I spoke to many players in preparation for writing the club’s 20-year history. Lyon’s clarity wasn’t so clear to begin with…

Luke McPharlin: He came in with a game plan that initially was like the general theory of relativity. You just could not understand it and it took a lot of time, that whole first summer of just continuous reinforcement and training it and even probably the first half of 2012. There is a lot going on but once you’ve trained it and played with it for a while you start to see how it all works and particularly how effective it is when it’s done right.

Ryan Crowley: The game plan is complicated but once you learn it it’s easy. I think that’s why it took us a while to really get onto what he was putting across. It remains the same week-in week-out moment-by-moment. But getting to know it is tough. When guys come into the team there’s a lot of homework for them and a lot of catching up. A lot of it is effort based, that’s easy, it’s just a mindset.

Consecutive games early in 2015 might illustrate a turning point. In the round three derby Freo kicked nine goals to none in the first quarter and led by 60 points at half time. A week later, again half time at Subiaco Oval, Fremantle was 48 points up over Sydney. In both games Fremantle seemed to be under a tight rein in the second half (five goals in total). Perhaps Lyon didn’t want the free-scoring attacking team the Dockers had shown they could be.

The Dockers finished on top in 2015 but, after losing in three of the last four qualifying rounds, went into the finals looking unconvincing. There was a qualifying final win over Sydney, drained by the Adam Goodes affair and without star Buddy Franklin and the season ended with a home preliminary final loss to Hawthorn dogged by the kind of skill errors fans would soon find familiar.

A near golden era was over. The Dockers went into a slump and a rebuild. This was a renovation that seemed to go over time and over budget. And it came at the wrong time.

When AFL football was played at Subiaco Oval the clubs had a captive audience. If you wanted to see games you needed to be a member. Not for Fremantle fans at Perth Stadium. You can walk up and buy a ticket on game day if you wish. Or stay at home if you don’t like the product.

Unfortunately for the Fremantle Football Club business model the product presented out on the field, where it matters, became unpalatable. The team was boring to watch. Conversations with fellow Freo fans followed a pattern. They were sick of watching the Dockers. Frustrated. Worn down. 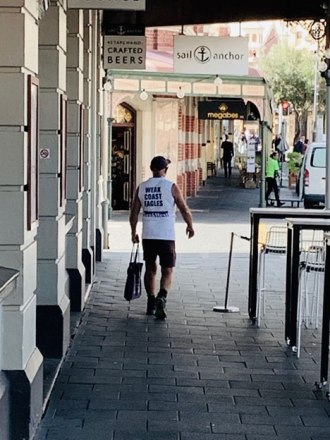 There was something worse… the bitter enemy West Coast had, since that derby thrashing in 2015, played in two grand finals, won a premiership and beaten Fremantle nine time in a row. I heard unspeakable things from Fremantle supporters in reference to the Eagles. “I quite like their coach.” “I like the way they play. At least they score goals.” “I like some of their players.” It was like a surrender. Luckily recent headlines and WCE fan outrage over the AFL All-Australian captaincy ‘snubbing’ has got Freo fans back to correct thinking about the cross-town rival. (See left, photo supplied. Thanks Ken.)

The funny thing about 2019 is that with a little luck the Dockers would be firmly in the eight and preparing for finals. And with a little less luck they’d be down with bottom team Gold Coast. Fremantle beat top teams, lost to bottom teams and won and lost close games. It was a hard season to explain but it looked like the team was going nowhere. A passage of play in the final game at Adelaide Oval almost summed up the season. Griffen Logue marked strongly just  backward of the wing. He looked unsure as he scanned possibilities up the field before heading back and across to Joel Hamling who also went wide. The kick bounced in front of Brad Hill who was caught holding the ball and Port Adelaide scored a goal. Defensive. Conservative. Untidy.

The Fremantle board acted as boards do by sacking the coach and indicated more change was needed by farewelling the CEO.

There have been a number of indications things haven’t been quite right at Freo during the re-build years.

• The captaincy. Some leadership expert group suggested it was good idea to have the players vote for the captain AND read out their 5,4,3,2,1 votes in front of the group. In 2016 David Mundy was voted in and in 2017 he was voted out. Shabby treatment for a club great. The method, maybe other clubs do it too, seems to me like a good way to create factions in the playing group. The club should be strong enough to appoint a captain… just as they make every other key appointment.

• Brad Hill winning the 2017 Doig Medal. I’m not sure I’ve seen a more relentless runner in footy than the younger Hill. He started well in 2017 but as the year went on his terrible disposal cost the team goals and perhaps even games. His win either put the Doig Medal voting system into question or highlighted a disregard for skill. Hill’s skill level was greatly improved in 2019 and he had his best year at Freo and probably in the AFL.

• Speaking of Doig Medal winners. If Brad Hill leaves he will be the second to go in two years. As Oscar Wilde might have said: “To lose one Doig Medal winner may be regarded as a misfortune; to lose two looks like carelessness.”

• Carrying on about past trades and drafts may be pointless but the club must acknowledge history if stuff ups are not to be repeated. But it is worth reflecting that Jeremy McGovern, Tim Kelly, Sydney Stack and Liam Ryan should all be on the Fremantle list. And we can wonder how things might have been if the Freo recruiters hadn’t considered Tom Sheridan, Hayden Crozier and Alex Forster better prospects than Stephen Hill’s little brother back in 2011.

It’s not all bad. In fact, as someone said, “It’s never as bad as it seems or as good as it seems.” The next coach might be stepping into something pretty special.

• Fit and firing… Alex Pearce, Joel Hamling, Luke Ryan and Nathan Wilson look like the nucleus of a premiership backline while Griffin Logue, Ethan Hughes and Taylin Duman had their moments and with others could round out that defence.

• You never know… Sam Sturt, Luke Valente, Tom North, Jason Carter and Tobe Watson didn’t get much of a go at it this year but signs are good.

• Those big forwards… Matt Taberner (if he can tread lightly on those fragile feet); Jesse Hogan (if he can find a group of ‘great mates’ who can find ways of being mates that don’t involve getting on the piss and smoking), Rory Lobb (if he can spend a little less time in the ruck) and Cam McCarthy (if the others come good so he’s not Cam the main man).

• Fremantle has done well on the trade table in the past two years. The Lachie Weller trade was like cheating though the high price paid for Hogan remains in question. Similar results this year will the have the list looking ok.

So here we are again. Fremantle on the verge of something. Ross Lyon and Steve Rosich are important figures in the club’s short history. Their replacements need to be even more important.