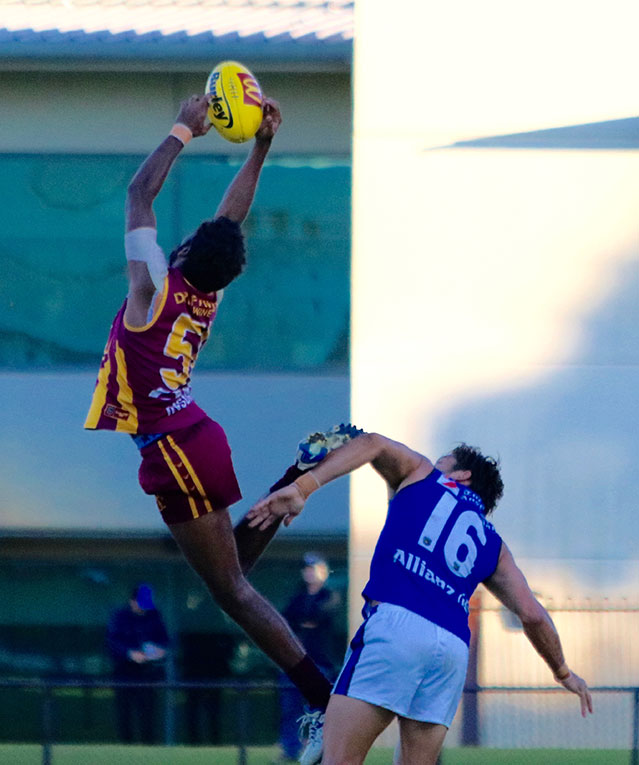 They teach decision making at coaching courses these days. Those in the know will tell you it’s a skill in Australian Rules football just like kicking, handpassing, tackling and marking.

Sometimes the decisions that claim a game are made long before the match is played. Usually by people who don’t even play.

Take the passage of play in the 2018 AFL grand final that finished with Dom Sheed showing nice kicking skills.

It began with Collingwood in possession – Adam Treloar looks calm as he runs close to the boundary with the ball. But he’s on his left foot and doesn’t have room to go inboard. The decision he makes is vital. Maybe he could keep the ball low, even kick it along the ground. But he makes the safe decision and kicks as long as his can, on his left, and it’s a floater.

Jeremy McGovern makes a decision, it’s the one he is encouraged to make. He sees where the ball is, leaves his man and marks the bloody thing. But where did McGovern come from? His father Andrew played for Claremont, Sydney and, most notably, Fremantle. I once wrote that the Dockers looked better when he was playing.

Post-football Andrew worked for the Clontarf Foundation founded by his Claremont and Fremantle coach Gerard Neesham. That led to Jeremy playing a bit of footy in Warburton, Kalgoorlie-Boulder and Albany before lobbing at Claremont. He was a bit pudgy, a bit relaxed but he sure could take a mark. Someone at West Coast decided there was nothing to lose and he was picked up at 44 in the AFL Rookie Draft on 2011.

After leaving his man and taking the mark McGovern played on and delivered a perfect kick to Nathan Vardy close to the middle of the ground. Vardy was chosen by Geelong at 42 in the 2009 AFL National Draft. He always looked pretty good – he could take a mark and kick a goal but he was always injured. He played 25 games and kicked 25 goals for the Cats before they decided to trade him to West Coast for pick 68 after the 2016 season.

In the ruck pecking order Vardy was well behind Nic Naitanui and Scott Lycett at the Eagles but the top two kept getting injured and Vardy kept getting a game. Geelong, meanwhile, were crying out for a decent ruckman in 2018. McGovern’s kick was perfect, Vardy marked it and kicked to a two-on-two featuring Liam Ryan.

Ryan arrived at Subiaco from Rovers in Geraldton in 2016. He would need a bit of time to adjust to city life but he’d come to a good club. He first appeared for Subi reserves kicking six goals in round three. He made his league debut in round eight and kicked two of Subiaco’s six goals in an 80-point loss to East Fremantle (times have changed).

Soon Ryan became a reason to go to the footy. He kicked 40 goals in 2016 and 73 in 2017, a small forward with a big leap, speed and tricks. He made fans swoon, photographers focus and opponents panic.

Overlooked in 2016 he was picked up in the 2017 AFL Draft by West Coast at 26. Coach Adam Simpson said he was looking forward to the excitement – he’d made a decision not to coach things out of Ryan just add some stuff.

Ryan made some errors in the 2018 AFL grand final but at that fateful late moment everything came together. The kick from Vardy was going past him but it was a favourite position for Ryan – going with the flight of the ball, turning, leaping, marking. He was away in a flash and he didn’t just bang the ball forward, he placed it gently to a two-on-one and Sheed couldn’t help but mark it.

And so Sheed, chosen at 11 in the 2013 draft had a shot for goal. Like Ryan, Sheed is a country boy. He played for Boulder club Mines Rovers in the Goldfields Football League and came to the Eagles via Subiaco.

Some decisions had been made about Sheed in recent times. He was a bit slow. Not really what the team needed. Then Andrew Gaff ‘made a poor decision’ and whacked Fremantle’s Andrew Brayshaw. West Coast decided to bring back Sheed and he won them a grand final.

One thought on “Decisions, decisions”