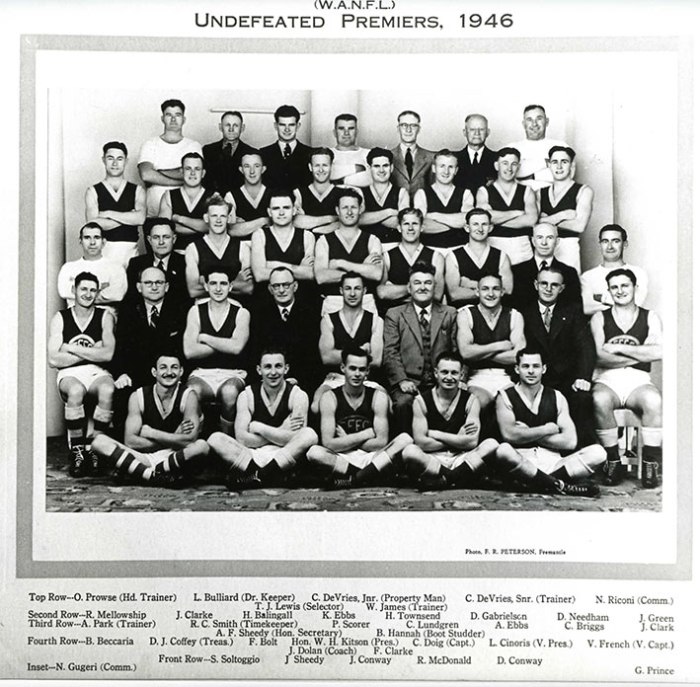 Subiaco are two wins away from  becoming the second undefeated premier in WAFL/WANFL history. East Fremantle didn’t lose a game in 1946. Photo by FR Peterson, Fremantle.

A goal after the siren from Jye Bolton secured a victory for Claremont at Bassendean Oval and a home final for the Tigers. Swan Districts led at each break, and when the final siren sounded, only to go down by five points. Alex Manuel kicked five goals for Claremont, Bolton was brilliant and youngster Jordan Clark showed signs of things to come. Brayden Noble (four goals) and Tony Notte (three) were influential for Swans. The game was the last in the WAFL for Kirk Ugle.

At Rushton Park Peel and East Perth were playing for a place in the finals. The defending premiers didn’t fire a shot. Hamish Bradshaw was again good for the Royals, Luke Partington was busy and kicked three goals and Patrick McGinnity also played strongly. Danyle Pearce’s last game for Peel was excellent.

Perth need to end Subiaco’s unbeaten run to have a chance of playing in the finals. As it turns out even that wouldn’t have been enough. They didn’t get close. Zac Clarke again dominated for the Lions along with Kyal Horsley while Ben Sokol kicked five goals. Clint Jones finished the season well for Perth.

The derby went as expected. The Bulldogs scored 3.9 in the first quarter and 20.2 for the last three. Captain Dylan Main had a day-out kicking five goals as did Mason Shaw, Nick Suban performed well in the midfield and Regan Spooner made a strong debut. Jon Marsh was East Fremantle’s best player capping off an impressive season.