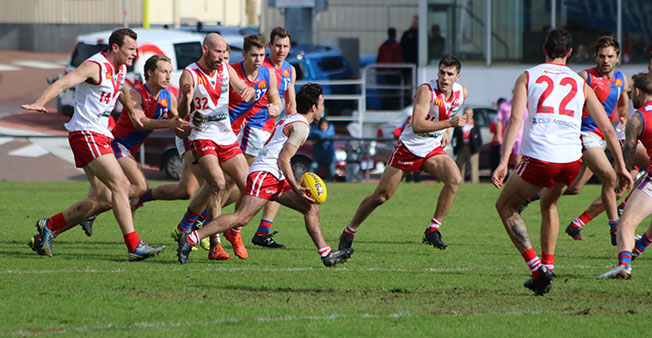 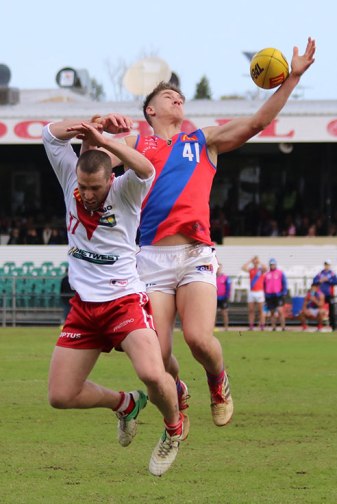 A nice gather from Nathan Alexandre over Ashton Hams.

It was another horrible Saturday in Perth with a wild wind and squally showers but the teams at Fremantle Oval made light of it particularly early… at quarter time South Fremantle 5.0 (30) led West Perth 4.0 (24). It got harder as the game went on as the battle for second place continued. The lead changed three times in the last quarter with Ashton Hams in his 200th game kicking a vital goal and bobbing up a the right times to help the home team to a five-point victory. Shane Hockey has been a fine interstate recruit during his time with the Bulldogs but on Saturday he played his best game yet – he had 41 disposals and made 19 tackles suggesting he was well and truly involved in the action. Noah Strom was outstanding in defence for South Fremantle, Brock Higgins won a spirited ruck duel with Chris Keunen (also a WAFL 200-gamer), Brandon Donaldson has lively and effective. Luke Meadows was in good touch for West Perth, Andrew Strijk kicked three goals and Michael Lourey and Blake Wilhelm did some good work in defence.

At Ruston Park, Peel (with nine Dockers) trailed East Perth (13 Eagles) by 15 points at quarter time but took control with a seven-goal second quarter and posted an important victory. Blair Bell was strong in attack for the Thunder kicking two goals and competing well, Tommy Sheridan and Danyle Pearce were good in the midfield while Sam Switkowski showed enough to suggest an AFL debut might not be far off. Stanley Wright was good for the Royals, Dom Sheed was busy and Luke Partington kicked three goals. The win helped Peel jump from eighth into the five.

Subiaco took a while to shake off Swan Districts at Leederville and led by just five points at half time – the Lions kicked eight goals to one after that. Lachlan Delahunty kicked a couple of goals and displayed his mobility for the Lions, Zac Clarke continued his good form in the ruck and Leigh Kitchen was good in midfield. Corey Gault, Steven Payne and Tony Notte (two goals) battled it out for Swans. 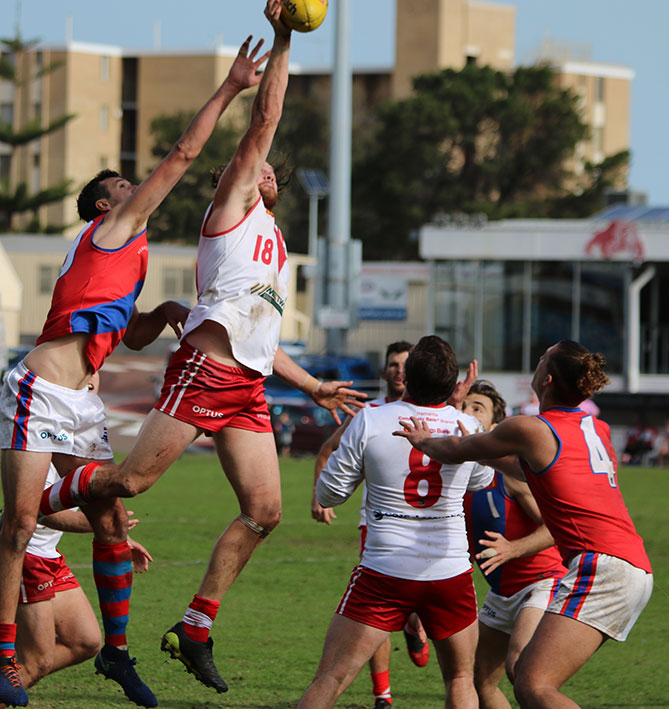 Brock Higgins and Chris Keunen in the ruck.