Looking into the sun at the Gabba. My seat was just above the 60… but I moved.

It was a week off from the WAFL and instead the live game for the week was at the Gabba – the meeting of the bottom two Brisbane and Carlton. I’d seen the Lions smash Freo a week earlier and Freo smash the Blues before the bye so this one looked predictable enough.

Carlton started ok but, as is their way, became hopelessly disorganised and some of the goals they gave up were comical. The Lions are on the up and the thing I like about them is their array of big, mobile forwards – Eric Hipwood kicked six goals but Oscar McInerney and Tom Cutler also move well. However the real star of the game was Dayne Beams who is going through a rough trot personally but playing sensationally. The crowd was about 21,000, not bad considering what North and the Suns attracted to the Docklands. Speaking of sun, it’s an issue for the crowd and the coaches at the Gabba – later starts would be nice.

The last time I visited the Gabba was Sunday 28 May 2006 when the Lions were still ok but fading slightly. They beat Fremantle by 68 points in front of a crowd of 29,999. I recall nothing of the game but it was memorable day. First some background. In 2005 I ‘developed’ an atrial flutter, a heart rhythm condition similar to atrial fibrillation. After three ablations (a fun procedure where faulty electrical bits in the heart are zapped while you, the patient, watch in a screen) it seemed I was cured.

However on that 2006 day at the Gabba I began to feel a bit off – light headed, strange sensations in the chest – certainly symptoms familiar to a footy fan during a close game but not when your team is getting pumped. I soldiered on until the final siren. Luckily I was a member of board of the Fremantle Dockers at the time and was able to make my way to the team’s rooms and locate club doctor Ken Withers. Turned out my heart was going at about 220rpm and I was eventually wheeled out of the Gabba into an ambulance and off to the Princess Alexandria Hospital – fellow director Mel Ashton was with me all the way. I’m not sure if he was in the room when they performed a cardioversion to blast my heart back to normal.

It was somewhat coincidental to read that on my second visit to the Gabba Carlton’s Caleb Marchbank left the ground in the second half and was taken to hospital after concerns with a “raised heartbeat”. I’m good now – the right cocktail of drugs keeps my heart in rhythm and I’m as fit as a fiddle so Caleb will be ok.

However I do need to share this little postscript. As I watched training at Fremantle Oval in the week after the Gabba drama Fremantle coach Chris Connolly sought me out. At the game review the coach urged the players to put the heavy loss into perspective. “No one died out there,” he said. “Les nearly did,” said one of the players.

Written on and posted from Flight QF 591 Brisbane to Perth… 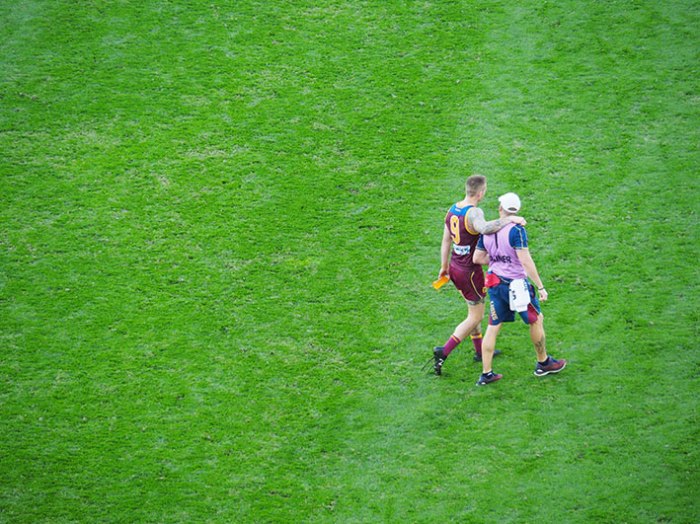