Haiden Schloithe marks close to the boundary at Fremantle Oval opposed to Mitch Crowden who missed the spoil by… that much. All photos by Les Everett.

The Sharks are the only team out of contention after 11 rounds of the WAFL season (and even they are a mathematical chance of making the finals if they cheat in the exam). Wins to South Fremantle and West Perth  consolidated their positions, the newly exciting Perth had another victory and Subiaco were challenged by East Perth. 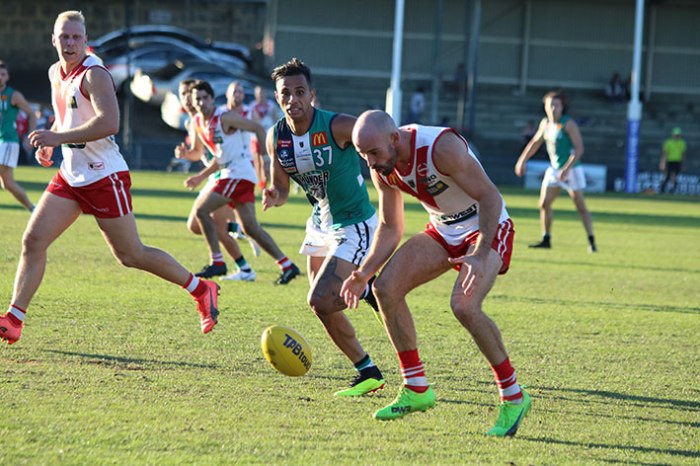 Peel’s defensiveness restricted the home team early at Fremantle Oval but the Thunder approach meant the lawn mower man could  have gone to work unhindered in their forward 50 for the last 20 minutes of the first quarter. By half time the teams had scored eight goals between them and already the Bulldogs had it in the bag. A high scoring last quarter was some relief to those who stayed on or kept watching… many had retreated to the members bar. Captain Ryan Cook was in everything for South Fremantle, Haiden Schloithe put in a classy display that netted three goals and Jacob Dragovich covered plenty of ground. Cory Dell’Olio kicked four goals. The return of Sean Darcy was positive for Peel and he was still going strongly late in the game after a spirited ruck duel with Brock Higgins. Thunder captain Gerald Ugle kicked two goals and was constructive, Blair Bell did his usual share of good work and Cam McCarthy read the ball well in defence.

It was a shoot-out at Lathlain Park with the Demons doing most of the shooting. Led by brilliant new forward Michael Bennell, Perth jumped the Sharks who had a mini-revival sparked by a great running goal by Cam Eardley. By half time the margin was just 12 points. The Demons dominated the second half, Bennell finished with seven goals, Cody Ninyette kicked five, Corey Yeo, Brant Colledge and Cody Leggett are the kind of big-bodied, hard-running midfielders that might just lead  the Dees to the finals for the first time since 1997. Eardley was East Fremantle’s best player, Dion Anthony worked hard and kicked long and George Hampson scored three goals.

There was another thriller at Claremont Oval where a conference of boundary, field and goal umpires ruled against what looked like the winning goal for the Tigers in Ian Richardson’s 200th game. Touched. He prefers the back line but Andrew Strijk was again a destructive forward kicking five of West Perth’s nine goals. Aaron Black and Shane Nelson provided the grunt for the Falcons and Zac Guadagnin had a good game. Kaiden Gilbert kicked four goals in a fine effort for Claremont, young ruckman Oliver Eastland impressed and Anton Hamp kept the clamps on Tyler Keitel.

At Leederville Oval Subiaco led for the most of the day and withstood a five-goal last quarter from East Perth to remain undefeated. Matthew Delahunty, who is enjoying not needing to pretend he’s taller than he is, kicked three goals in a strong running display, Hayden Kennedy and Kyal Horsley were strong in the midfield and Gregory Clark played his best game in a while, marking well in defence. Brendan Ah Chee looked good for the Royals and Will Maginnis kicked three goals.

Round 10: East Perth vs  Claremont;  West Perth vs Perth; Swan Districts vs Subiaco.