Josh Cuneo spoils Matthew Parker in the Fremantle derby while the can drinkers look on. All photos by Les Everett.

There was bit less drama in the WAFL this week with Claremont, Perth and East Fremantle slipping further away from the top five. Subiaco had the bye so we had a week of forgetting about them.

It was an interesting weekend for Peel (and Fremantle) with the Dockers dropping Hayden Ballantyne, Michael Johnson, Danyle Pearce and Brandon Matera and they all lined up for the Thunder. Johnson started in the forward line and set up lots of scoring opportunities in what was his 50th AFL game and first for Peel, he took a number of unlikely marks. Matera kicked three goals in the first half and did ok in the midfield in the second. Pearce was very lively and covered a lots of ground while Ballantyne spent time in the midfield and tried hard without having much impact. The most assured Peel player was Blair Bell. He doesn’t get the ball much but tends to get it in important moments and he makes very good decisions – he’s better than a lot of players on AFL lists. Jordan Boullineau looked confident, Bradley McGowan did some good things and Luke Strnadica marked well. Ben Howlett kept the pressure on the Tigers with 17 tackles. It wasn’t much of a game, low-lighted by terrible kicking from both teams though they also had moments of slick ball movement. Tom Curren was busy in the midfield for Claremont, Haydn Busher again ran hard from defence and Tom Lee kicked three goals. If the Tigers had kicked straight the result could have been different.  At half time I inspected one of the apartments on the Claremont Oval boundary.

Perth but in their most dominant display for years, for a quarter, at Bassendean. At quarter time the Demons led 8.1 (49) to 2.4 (16) and the home crowd was in shock. Swan Districts showed maturity to work back into the game and by the last break scores were level. Swans scored five goals to none in the last quarter to complete a strange day for fans of the Demons. Brayden Noble kicked five goals for Swans, Todd Banfield led the revival and Mitchell MacKenzie had his best game at league level. Clint Jones and Brant Colledge were strong in the midfield for Perth while Michael Bennell  from Albany Sharks kicked three goals in a promising debut.

A great one-handed mark by Mason Shaw. He then kicked a goal from the boundary.

At Fremantle Oval the Bulldogs simply outclassed the Sharks in the derby in front of a good crowd who were in the mood for something a little more competitive. The East Fremantle players try hard and try to do the right things but poor decisions and poor skills let them down time and again. Brandon Donaldson kicked four goals in another impressive display, he does a lot of running, marks well, kicks well and, in this game, scored four goals. Marlion Pickett was again good in the midfield and did a bit of part-time rucking, Matthew Parker kicked three goals as did Ashton Hams and Mason Shaw. I also liked the look of Kyle Russell. Jonathan Marsh busted a gut for the Sharks again, Jesse Wynne worked himself into the game and Harry Creasey did some good work including a brilliant last-quarter goal.

In the Perth derby a brilliant six-goal effort from Tyler Keitel was the difference as West Perth held control at Joondalup. Mitchell Peirce and Jay Van Berlo were also good for the Falcons. Stanley Wright impressed for the Royals, Will Maginness kicked three goals and Francis Watson was again good in the back line. 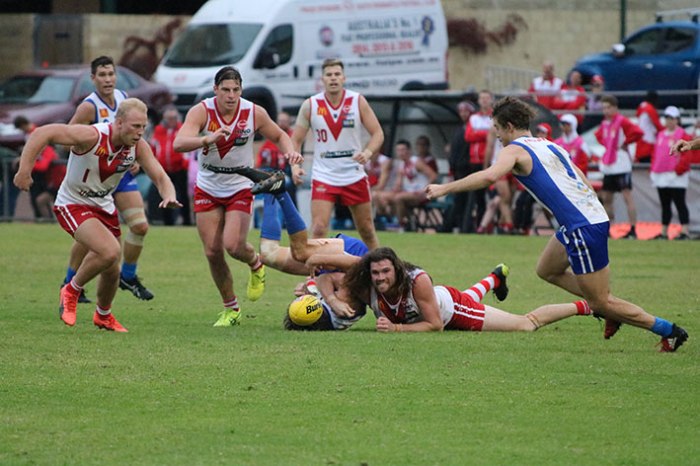