Dr Kieran James’ book – Goodbye Leederville Oval is a unique and credible insight into Perth’s sporting culture. It covers three major themes – the fluidity of Perth’s sporting culture, the pain of transition in Australia of sports moving from semi-professional to professional pathways and one that is currently being further examined across the state. What is it to be a Western Australian?

James uses soccer to elicit his supporter group as part of an intimidatory force and uses the literature from the United Kingdom soccer scene to introduce his supporter group. It is the fluid connections that come through that are the highlight of the experiences of Kieran’s youth. There is a transient connection to the WAFL by boys of his generation, especially when compared to the intensity of support in the VFL.  This is challenged by the ‘parochialism’ at state level which superseded the interest in metropolitan clashes.

Dedication came with the ‘cultural’ acceptance that kids would be ‘permissed’ to wag school to watch the WA state team play Victoria. That this was something that ‘everyone’ did. This is where the real heart of sporting culture comes alive, something that saw little ability to be transient. The pride of their Western Australian identity was at a peak, school was nowhere near as important and there was a ‘tactful’ acceptance of this by the Education Department with not cracking down on it.

For Kieran, there is ever-lasting pain from the transition as he has a strong engagement to the league and the game. But he is also part of the fluidity, he sees no difference between his love of Dorrien Gardens and Leederville Oval, the culture he critiques allows him to create a book with no code hostility. He crosses over League, Soccer and Australian Rules throughout this book, framed by a city which as a whole allows people to pick and choose what elements of Western Australian society that you engage with.

It is expertly sourced, referenced and memorialised. He transects a critical lense on Western Australian societies ‘either/or’ rather than ‘yes/and’ which he suggests is framed by the West Coast Eagles who were able to delineate the attachment to the Western Australian State of Origin side when it was created in 1987.  James challenges this with how Queenslanders supported their Rugby League club sides and their State of Origin heroes. That in Perth this eroded and the passion of the state was transferred to its club side.

The processes of the construction of this period is critical for future studies into the game, including my present book on Perth Glory which utilised the passion behind the WA state side which was then transferred into the ground-breaking records that Perth Glory attracted when it entered into the National Soccer League in 1996. It provides further understandings that sport in WA is fluid, it is about state pride at its heart – not the code of sport you play.  .

What is the highlight though is the insight into mid 80s supporter culture in Western Australia, the lack of class, political and social friction within James supporter group is similar to my experience when part of the home end at Perth Glory. The group I sung with was from all walks of life, but our connection was our united passion for the Glory, which is shaped by our shared strength of Western Australian identity.

If there is any critique of the book, is that it did not look at the clash points within Leederville Oval when Perth Glory tried to transfer the ground into a rectangular venue. With so much insight and academic theory being integrated from a soccer background, this would have been a valuable area to analyse by James.

The book is integral for anybody that is interested in Perth’s sporting and social history, it engages with the reader a mixture of memoir/analysis of the pain of reform. It crosses code boundaries and defines the characteristics of Western Australian society.

Dr Kieran James should be congratulated on a text that will have long-standing benefits to the study of sports history in Western Australia. 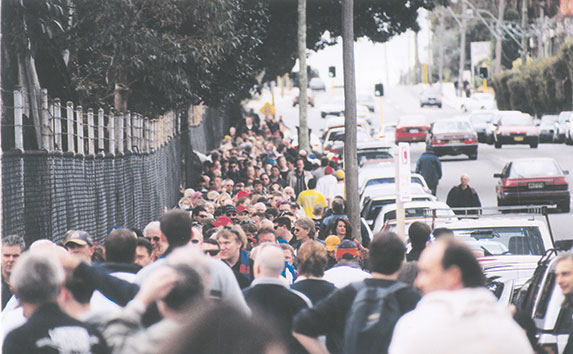 Fans gather outside Leederville Oval before a Perth derby in 2003. Photo by Les Everett.