Keeping an eye out… 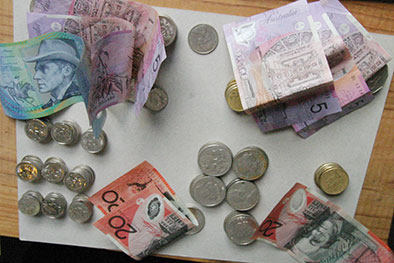 From the street (first haul).

My cousin Don Milner reckons it’s bred into us old Goldfielders. We walk with our heads down, instinctively looking for a glint of gold.

I’ve never picked up a nugget, but my head-down approach has had its rewards over the years – it’s allowed me to spot things that don’t glint at all.

At the Kalgoorlie races in 1963 I found a five-pound note while collecting discarded betting tickets. I kept it in a drawer in my bedroom, looking at it and touching it from time to time. It took years to spend.

At the trots in 1972 I’d lost everything before the start of the last race. Then I spotted a $10 note on the ground in the crowded and dimly-lit betting ring. I backed a winner with it and went home with $110.

But there’ll be no more miraculous gambling stories, I promise!

In 2008, I was walking to my car after watching Fremantle lose to Hawthorn (in the AFL competition) when, on a dark Subiaco street, I saw a $20 note on the footpath. I picked it up and slotted it neatly into my wallet. My mood was suddenly brighter.

There were other finds, including nice gleaming one- or two-dollar coins. But over time I noticed something. Due, no doubt, to my innate Goldfielder’s ability I’d see five-cent coins everywhere. There they’d be, sitting in the grass or on the footpath, and I’d just pass them by. I began to wonder what kind of haul a person could amass by picking up every bit of money they saw on the street.

So I decided to find out.

On 30 June 2012 I saw a five-cent piece on the paving in the High Street Mall in Fremantle. I picked it up. My journey had begun. When I got home, I put the coin in a small container and decided that some time in the future I’d count up my findings and donate them to charity.

The High Street Mall has proved to be a happy hunting ground. I enter the mall from the Fremantle Town Hall end almost every morning on my way to buy a newspaper and regularly pick up a coin… usually a five-cent coin. One morning I found a $20 note. Earlier this year I found my second $20 note – on a path to the beach in Busselton. During this project my note count has been two $20s, one $10 and five $5s. Even after all these years, picking up a note takes me back to my bedroom in 1963, treasuring my precious five pounds.

I’ve picked up money in Adelaide, Busselton, Castlemaine, Fremantle, Kalbarri, Kalgoorlie, Kwinana, Melbourne and Subiaco. On consecutive visits to Adelaide I found a two-dollar coin almost as soon as I arrived at the terminal of the airport. My last find was a dollar coin on the street right outside my house in Fremantle.

The only time I haven’t stooped to pick up a coin was on busy King Street in Melbourne. I felt strangely bashful and, besides, I’d seen what blokes do on King Street late at night after their visits to the various “gentlemen’s” establishments nearby.

Picking up a five-cent piece might look a bit cheap: I admit to using the old tying-the-shoelace-trick to disguise my action when there are people around. A woman in Kalgoorlie once gave me a disapproving look, but I soldiered on. And, no. I haven’t been fooled by a coin stuck to the pavement. Yet.

Not long ago, I tallied what I’d found:

I banked it, and then delivered a cheque to St Pat’s in Fremantle. They provide services to the homeless and disadvantaged around Freo and the south metro area.

FOOTNOTE: Soon after dropping off the cheque at St Pat’s on 8 February 2016 I was on my way home from walking into Freo and picked up a $2 and moments later a $1 coin. So I started my next collection.

I counted up the haul today and wrote another cheque to St Pat’s.

One thought on “ALL THAT GLITTERS by Les Everett”