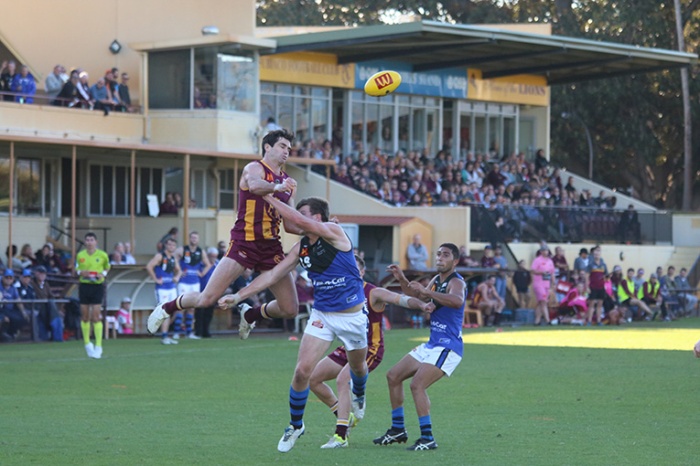 Clancy Wheeler did everything right at Leederville Oval. Photos by Les Everett.

WITH a seemingly obvious big man advantage and the confidence five consecutive wins brings East Perth began the match-of-the-day impressively. It took the top team time to find their rhythm  and their mobile small big men Clancy Wheeler and Lachlan Delahunty to influence the game but it happened. Subiaco dominated from late in the second quarter and kicked 10 goals to three in the second half to record another ominous victory. Wheeler kicked three goals in a best-on-ground performance, Ben Sokol also kicked three goals and his marking was vital in attack, Kyal Horsley and Leigh Kitchen bobbed up at important times in the midfield and Adam Cockie put in a powerful performance. Liam Ryan’s three goals in the third quarter tilted the game in Subi’s favour and he also impressed with some great smothers and tackles, he finished with four goals. Brad Stevenson was good in defence and attack. Malcolm Karpany was constructive for East Perth, Callum Hart did some good things as did William Maginness while big men Jonathan Giles and Scott Jones had their moments.

The Tigers made it two from two at the new Claremont Oval and proved far too strong for Swan Districts. Beau Maister and CJ Oakley each kicked four goals while Matt Guelfi (two goals) and Jye Bolton controlled the midfield. Corey Gault was the best of the disappointing Swans.

It won’t be a winless season for East Fremantle. The Sharks came from behind in style and crushed Perth at East Fremantle Oval. The promising thing for East Fremantle was the number of youngsters who stood up in the victory. Matthew Burton kicked two goals and was his team’s best player, Tom Marshall and Tom Bennett had good games and Nathan Fahey and Jesse Mirco each kicked three goals. Old stagers Jayden Schofield, Tim Bristow (three goals) and Matthew Watson also made big contributions. Mitchell Browne was the best of the Demons.

The trip from Fremantle to Joondalup is one of the most daunting in the WAFL – I get lost every time I go there. South Fremantle arrived on time and led all the way. Midfielders Dylan Main and Haiden Schloithe were outstanding and each kicked four goals, Marlion Pickett and Tim Kelly were again effective and Brock Higgins controlled the ruck. Tyler Keitel kicked four goals for the Falcons.