With one round remaining there’s one spot in the WAFL top five up for grabs and the Sharks and Royals will play for it at East Fremantle Oval next Saturday. 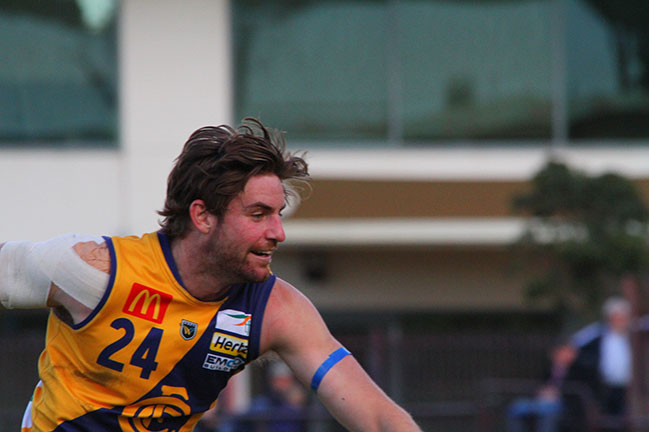 East Fremantle copped a thrashing from Claremont in round 22 in a clear indication that one of the best four teams in the competition won’t take part in the finals. After a tight opening the Tigers took control in the second quarter and romped away in the second half kicking 14 goals to two. Jack Bradshaw celebrated his return to the league team with eight goals and big man Darcy Cameron kicked five. Jye Bolton was again unstoppable in the midfield, Justin Speed scored three goals, Mitch Andrews (pictured) dominated the ruck and Francis Watson was good in defence. Brett Peake kicked three goals for East Fremantle and Jesse Adamini worked hard.

It was a thriller at Leederville with the lead changing at each of the first three breaks and South Fremantle holding on to beat a fast-finishing East Perth by four points. Speedster Jacob Dragovich had a breakout game for the Bulldogs, Haiden Schloithe kicked four goals, Mason Shaw (right) got three and Shane Hockey was strong in the midfield. Jamie Bennell kicked three goals in his best game in a long time, Paul Johnson dominated the ruck and Mitchell Fraser was again good in the back line for the Royals. 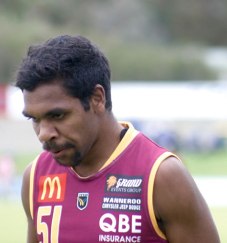 I find Peel impossible to read from week to week – this week we saw them at their best and worst on the same afternoon. Thunder controlled the top team for most of the game and led by 26 points at three quarter time. In the last quarter Subiaco scored 6.7 (43) to nothing. Liam Ryan (pictured) was at it again for the Lions and kicked four goals as did Hamish Shepheard while Adam Cockie, Clancy Wheeler and Greg Broughton were important in the comeback victory. Blair Bell has been outstanding for Peel this year and had perhpas his best game with five goals, Matt De Boer did his bit in the midfield and Anthony Morabito had another good game. 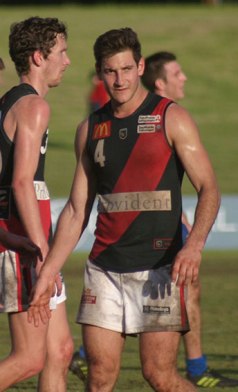 Conditions were difficult at Bassendean but Perth enjoyed it with an outstanding first half and comfortable victory over bottom team Swan Districts. Clint Jones made 47 disposals in a typical hard running effort, Spencer White kicked five goals, Marshall Jones kicked three goals, Michael Sinclair maintained his excellent form and Aidan Tropiano added grunt to the midfield in his return. Adam Faulkner was tireless for the home team, Brandon Erceg did well in defence, Rudy Riddoch was lively and and Jesse Turner did some good things.