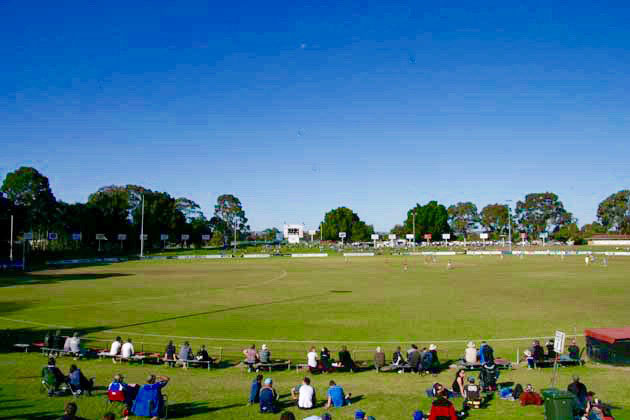 FIRST up a confession, I am not an Australian Rules football follower, but don’t write me off just yet.

Growing up I spent many hours following the WAFL and my dad’s tireless loyalty of the West Perth Football Club (and his endless hope for the then Cardinals to win a premiership).  I was of the era when you knitted a footy scarf of your team – there were a few dropped stitches in my red and blue scarf but I wore it proudly. Probably the only WAFL grand final I went to was in 2003 when West Perth won against Subiaco – a momentous day for my dad with me sitting by his side.  Those West Perth fans know how to cheer.

So I get why people follow and love football, it’s just I have different interests.

Home of the Demons. Photo by Les Everett

Anyway for 13 years I have lived just down the road from Lathlain Park, the home of the Perth Demons. Every day I get to see the beauty of that place – the iconic grandstand, the oval and the grassed embankments leading up to that great scoreboard.  And all surrounded by trees planted some 60 years ago. I know beauty is in the eye of the beholder and not everyone will agree with me. Maybe it’s also that Lathlain Park with its distinct grandstand and scoreboard takes me back to the grand old days of the WAFL. I’m sure many kids ran amok on those grounds while the crowds roared; and I imagine some of the kids I see playing under the trees now are the next family generation. 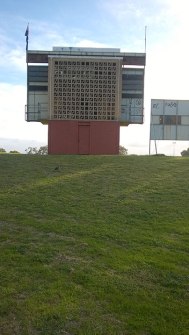 Bricks at the back. Photo by Sue C.

I walk pass the oval on match day and hear the cheers from the grandstand. Demons supporters are loud, but the volume certainly increases when the Sharks supporters are there, though no one beats the roar of the mighty Falcons cheer squad (I still have a soft spot for the red and blue, and think ‘Carn the Cardys still has a better ring).  And I love the scoreboard is manual, something rare in this digital world. I even like the bricks on the back of the scoreboard – so rare these days!

I guess what I am trying to say is that you don’t have to be a football fan to appreciate what the game means to others.

Tree and the stand. Photo by Sue C.

I’m sad the beauty of Lathlain Park may soon be gone. Sure I know there’s a need to improve the Perth Demons’ facilities, I just don’t think it should all go to make way for the West Coast Eagles.  As I said I don’t know much about football but I hear Lathlain Oval is the size of the SCG and that it’s one of the best WAFL grounds to play on. So I don’t know why you can’t have one oval with different sized markings and movable goal posts. From what I hear the Eagles and Demons train at different times, so isn’t one oval enough? But if two ovals really are needed, surely there is some smart landscape architect out there who can design it so the existing site and trees can be preserved as much as possible.

The Lathlain Park scoreboard in 2012. Photo by Les Everett.

I wonder if those people who tirelessly built Lathlain Park and planted those trees would have imagined in as little as 56 years it would be gone. If you want to share your memories or stories about why you think Lathlain Park is important then please comment below and see https://www.facebook.com/HelpSaveLathlainPark/

You may completely disagree with me and I respect that too – I’m not trying to enter into an argument just looking for memories about why Lathlain Park is important.

4 thoughts on “What’s so special about Lathlain Park? by Sue C”