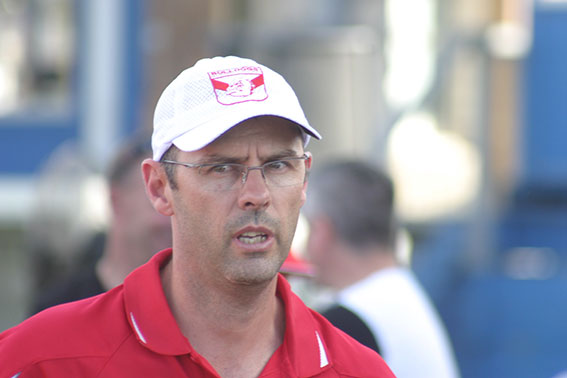 Conditions were wild at Rushton Park. Kicking with a howling gale East Perth scored the first two goals… and only one more for the rest of the game. With Michael Barlow in outstanding form Peel handled the conditions more effectively until the last quarter when their over-defensive approach allowed the Royals to get within a goal against the breeze. Thunder controlled the last few minutes and Brady Grey scored the sealer after a strong mark. Late in the third quarter the umpires conferred about stopping the game after hail fell. Barlow’s performance included three of his team’s five goals, Tendai Mzungu played loose in defence in the last three quarters to great effect, Blair Bell’s strong ball winning was impressive while Sam Collins and Matthew Ubergang marked well in defence.

Tom Barrass played  cleverly in the back line for East Perth, Paddy Brophy was constructive and Fraser McInnes marked well.

It was a thriller at the Showgrounds where the inaccurate Sharks didn’t kick a goal in the last quarter and were saved by a mark from Fraser Perry in the dying moments and held on for a five-point victory over the Tigers. George Hampson was again outstanding for East Fremantle and kicked two goals, Brock O’Brien was good in defence and Liam Anthony and Dion Anthony were highly effective in conditions that included hail.

Keifer Yu enjoyed the wet and had his best game on the year for Claremont, Ian Richardson provided plenty of opportunities and Darcy Cameron bounced back into form.

West Perth are back. A comfortable win over Subiaco confirmed that the predicted demise of the Falcons was premature. Shane Nelson was outstanding for West Perth, Luke Meadows again defended strongly, Dean Munns did his job, Rohan Kerr used the ball well and Nic Rodda continued his good form.

Kyal Horsely tried to lift the Lions, Lachlan Delahunty was tireless in the ruck and Liam Ryan kicked two goals in a lively performance.

The wild weather made it to Bassendean but the players from South Fremantle and Swan Districts didn’t take any notice. In a high-scoring encounter Swans gave a bit of cheek before the Bulldogs got away in the last quarter. Blaine Johnson kicked five goals for South Fremantle and Ben Saunders got four. Ryan Cook and Ashton Hams were in brilliant form.

Adam Faulkner and Matt Riggio did their best to keep Swan Districts in the game and Matt Rogers kicked three goals.