THE 2016 WAFL season has started. The big talk leading up to round one was the strength of the alignment teams with Peel and East Perth fielding unusually high proportions of AFL listed players. Some said they should start the year by playing each other – just to make it fair. Turns out they both lost.

The game I saw was on TV from Fremantle Oval – I think the commentary team was trying to give it some naming rights name… please. The Channel Seven coverage is very welcome and pretty good despite the heavy handedness of 2015. One suggestion – no need to give extra plugs to the sponsors during the call, it kind of makes you sound like a community radio station.

West Perth kicked the first two goals and I was having dark thoughts about South. 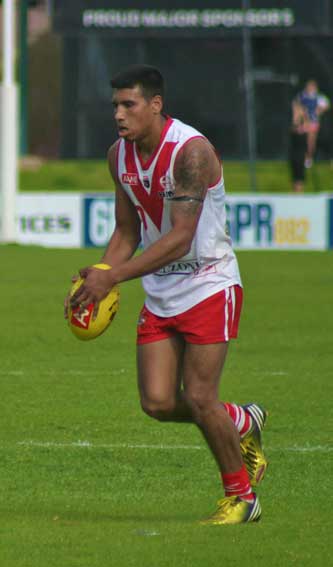 Suddenly the Bulldogs looked good. Sandover Medal fancy Ashton Hams had 15 disposals in the first quarter – he gets a lot of touches by lurking around after a team mate has taken a mark but his expert distribution by foot (we will refer to this as kicking for the rest of the season) makes him dangerous. South’s best midfielder in my opinion was Tim Kelly (pictured) while Marlion Pickett, who seemed to be used as a key defender, played a remarkable game. The Bulldogs have two dangerous big forwards in Ben Saunders, who kicked three goals, and Mason Shaw, recently returned from Port Adelaide. When they learn to play together they’ll cause trouble. Josh Pullman marked well in defence.

Andrew Strijk was effective for the Falcons as was Jay Van Berlo while Max Duffy (East Fremantle. Peel, Fremantle) kicked three goals in his first outing for the red and blues.

The most surprising result was at Leederville where East Perth, stacked with Eagles and celebrating the establishment of a new record for games played for the club were favoured to account for Claremont. The game was the 270th for Craig Wulff beating Derek Chadwick’s record that had stood since 1972. Wulff won’t beat Chaddy’s record of seven losing grand finals although he knows the feeling having played and lost in 2013 and 2014. 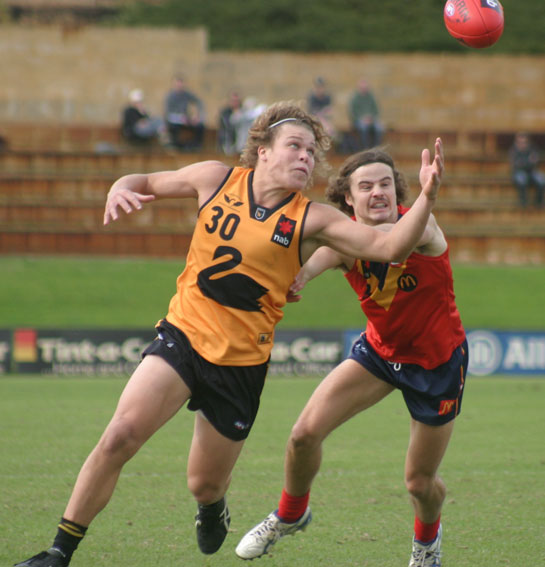 Anyway Claremont absolutely thrashed the Royals. Darcy Cameron kicked four goals, Matt Davies continued on from where he left off last year and Jared Hardisty (pictured playing for WA 18s in 2014 and will become a crowd favourite), was good in his return from Hawthorn as the Tigers suggested they are well and truly back in contention.

Peel were even more stuffed full of AFL players – only four, including new captain Gerald Ugle, were not on the Fremantle list. Thunder also lost but it was close and against the 2015 premiers. Peel established a good lead early but a match-winning performance by Kyle Halligan, who kicked six goals, helped turn the tide. Kyal Horsley was a dominant figure in the midfield.

Harley Bennell, in his first game for Peel since 2010, kicked four goals and Zac Clarke was the best ruckman on the ground.

Rob Wiley enjoyed his return to WA footy as he guided East Fremantle to a strong victory over Swan Districts. Cameron Eardley was the star for the Sharks along with busy midfielder Sean Henson. Justin Simpson played his 150th game for Swans and was his team’s best player.