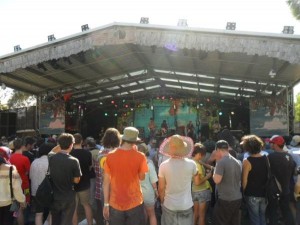 My first experience with this venue was Meredith in 2008. For various reasons (the most likely being that I am not in the festival’s ideal demographic and therefore always miss out on the ballot), I haven’t returned to that festival. However, the March iteration of Meredith is Golden Plains, and each year a bunch of us convene and do our best to lift the average age of the attendees. We camp up on the back boundary of the property, have access to a hot shower in Baz’s van, set up our deck-chairs towards the rear of the supernatural amphitheatre and venture closer to the stage only when the music really grabs us. Which is actually more frequent than you might think. Highlights were Banoffee, First Aid Kit, Courtney Barnett (more about CB later), Conor Oberst, Felice Brothers, Twerps and Sharon Van Etten. And not seeing The Village People. Unfortunately I am missing this one next year (I am such an old hipster I have to get one replaced). 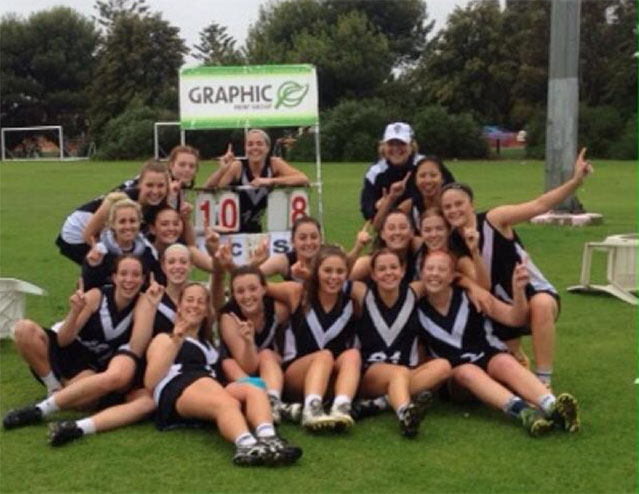 Having not made the final in 2014 when Victoria hosted these championships in Bendigo, the Vic women were seeking some redemption in Adelaide in April. The men’s final was played first and Victoria won comfortably over WA. Then the weather came in and the women’s game – Vic v SA – was played in heavy rain, which played havoc with my phone as I tried to live-tweet the game on behalf of Lacrosse Victoria. I had two daughters playing in the Big V and both had good tournaments. In a final that was close all the way, the Vics prevailed 10 goals to 8.

Selection for the Australian team to compete in the Under 19 women’s world championships in Edinburgh in July/August was finalised in January. One daughter was selected and the other missed out. But there was no way she was going to miss out entirely, even though it would be a significant disruption to the Year 12 studies: “How could I concentrate on study when I know my mates are overseas playing lacrosse in the world championships?” Audrey and the team went via a training camp in the US and on to Scotland. Ursula joined Helen and me and sort of had an early schoolies as she joined a number of other young travelling Australian supporters. For the first time in the 20-year history of the championships, the Australian team didn’t make the gold medal play-off and was defeated by just one goal by England in the bronze medal game. Canada made history by defeating the US and thereby claiming their first women’s U19 world championship.

By the way, I was the official media person for the Australian team. I got to wear a lanyard that said “media”. Are you impressed by that? You should be.

Courtney Barnett at The Forum (Teeth and Tongue support)

I first saw Courtney Barnett live a few years ago when she supported Jen Cloher (in whose band Courtney also plays) at the Northcote Social Club. I have since seen her support Kurt Vile at Shadow Electric in Abbottsford, at the Corner Hotel, at Golden Plains and at this show at the Forum. Support this evening was Teeth and Tongue, another favourite of mine. Courtney Barnett has had such a huge and successful year that I can sense there is a bit of a backlash against her – it became particularly evident when Triple J awarded her album of the year (it was the Tame Impala fans who were most vociferous in their complaints).

I also saw CB perform three songs at The Age Music Victoria awards night. Not her best show, but when most of the audience are chattering amongst themselves instead of listening to the music, I am not surprised the performer doesn’t give their best. I bought two tickets to CB Palais show in January 2016, but now cannot go (same reason for non-appearance at Golden Plains 2016). My grateful daughter is now accompanying my wife.

This web-based show lives up to its name; well half of its name. While it is certainly amateur, it runs for only half an hour. There are six episodes, each hosted by the person who started the project, Laura Imbuglia, incorporating a variety of segments – some of which are great and some of which miss the mark by a long way. As described on the website: Each episode will feature a selection of interviews, skits, surprises, curios and live music filmed in Melbourne’s most iconic bars and rehearsal spaces. This is a unique arts & culture show created by the artists of Australia.

There are musician/band interviews and live performances of bands topping and tailing each episode. My favourite segment is the food segment featuring Melbourne folkie singer songwriter Laura Jean (Englert). Not sure if it is because I love her food tips or just cos I love Laura Jean.

The first Footy Almanac Oaks Day in the Nursery carpark was in 2009. It has been going on every Oaks day since. It is a fun day of punting and socialising. This year there are photos of my wife wearing gumboots as part of her elegant Flemington racewear, and at one stage the races were delayed because of a huge downpour. We survived (the rain at least, but not necessarily the punt). The format of the day is that we all chip in for drinks and guests bring picnic food to share. One of our guests trips across from Wynyard in Tasmania to be part of the throng, and he brings some of the best of the shared picnic food.

You would have probably heard or read stories of Melbourne live-music venues closing, and it is true. What doesn’t get as much publicity is that there are also venues opening. Until a few weeks ago I had never been to Howler. Helen and I ventured along to this Brunswick venue on the last Saturday in November to see New York-based Melbourne ex-pats Luluc. Comprising Zoe Randell and Steve Hasset, their music is beautiful and their interlude chat was amusing, particularly with Steve’s father in the audience. I have since been back to Howler to see Nashville rockers Bully – a striking contrast to Luluc. This link is to the Luluc title song of their 2014 album Passerby.

On the subject of venues opening, this Saturday I am seeing Fraser A Gorman at a new CBD venue: The Church of Bang Bang Boogaloo. I reckon it sounds an ideal venue for CW Stoneking.

Into its third season, this Josh Thomas show is getting better each year. It is compulsory viewing (usually on delay because I have little control over the primary television viewing in my home) for me, usually with one of my daughters. You can read a better Junkee review of the show here. After each episode I sit and think – that is such a good show.

Helen and I have four children – and three of them completed year 12 this year. Results came out this week and all were very happy with the outcomes. And if they are happy, I am happy. We are now done with secondary education (and the self-imposed pain that is school fees).