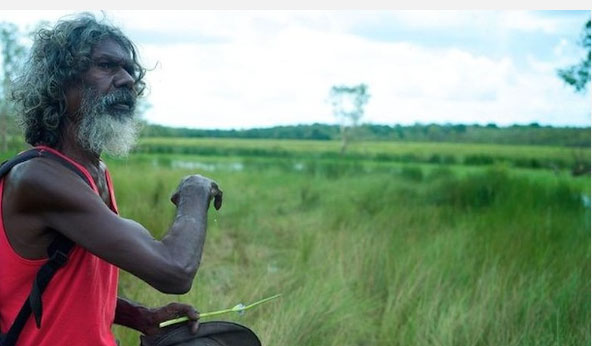 A look at Another Country (G)…

DAVID Gulpilil stands as one of this nation’s leading indigenous actors, someone who has met the Queen and partied with Bob Marley and Jimi Hendrix.

But in Molly Reynolds and Rolf de Heer’s final chapter in the Country series he’s not acting – he’s providing the direct voiceover narration.

Gulpilil takes us into his country in the far north of our huge continent and he introduces us to his people: the Yolngu of Ramingining.

It’s a long, long way from the centres of the European film industry in Cannes and Venice and, indeed, Gulpilil’s home country is 400 kilometres from the nearest town and virtually cut off and inaccessible by road during the wet season.

He explains to us how Ramingining came into being. The local authorities herded a number of indigenous groups into the one settlement, completely disregarding language, customs and land ownership differences.

As Gulpili says very succinctly: “Our culture doesn’t fit your culture. You have to listen to us. Listen to our history, what we say and most importantly listen to who we are.”

So what does the documentary show us about life in Arnhem Land, in the top corner of the Northern Territory.

There’s some everyday scenes. People shop in the town’s sole store, they play cards. There’s a confronting scene or two.

Such as the time a kangaroo is trapped by dogs and then clubbed to death.

The reach of the Christian missions in the 19th century is not forgotten either. During a tropical downpour at Easter time the people re-enact Christ’s crucifixion.

And there’s some other startling revelations imparted by Gulpilil. Where white people see a pile of garbage the narrator tells us his people see nothing.

“We don’t see rubbish. We don’t understand it,” he explains.

“Everything comes from the bush so everything goes back to the bush.”

Sure, he’s playful and maybe mischievous at times. But Gulpilil also enlightens us and some of his narration is quite dramatic.

He informs his audience he’s done jail time. “I been to prison. More than once,” he says, with a chuckle.

Like me, you’ve probably marvelled at actor David Gulpilil in films such as Walkabout and Stormboy and more recently de Heer’s The Tracker (2002) and Ten Canoes (2006).

In those movies he was perhaps playing a role as an intermediary between his indigenous world and the Anglo-Celtic sphere.

Here, he’s narrating activities and customs from his own country, the world he retreats to after walking the red carpet at big international film festivals.

Director Molly Reynolds has been available to speak at question and answer sessions at screenings of her documentary following a season at the Melbourne International Film Festival.