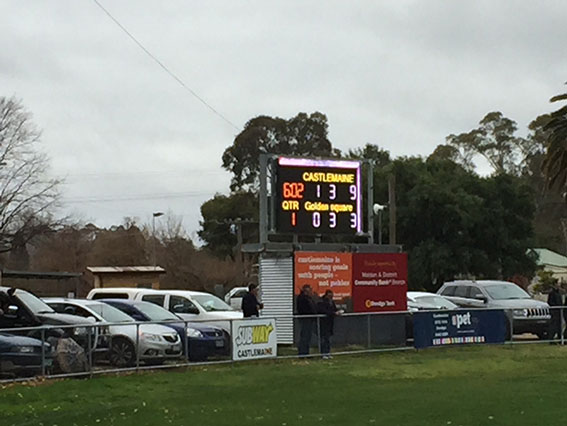 The scoreboard early in our feature game. Photo by Neil Belford.

GOLDEN Square unleashed an eight-goal third term to overrun a game but eventually outgunned Castlemaine on Saturday in the Bendigo Football League. Trailing by seven points at the main break after an even first half the Bulldogs stunned the parochial Camp Reserve crowd with an unrelenting blitz at the pavilion end. The Magpies’ big-name one-off recruit Jason Cloke started at full-forward and booted 4.3, with all his scores save one late third term major landed before half-time. The ball hardly went down his end until the concluding five minutes of the third quarter as Square pounded their goalmouth on their way to a 16.12 (108) to 11.7 (75) victory. The first term was as bleak and forgettable as the temperature with just one goal registered – to Magpie Rhys Jenkins. The tempo picked up during the second stanza as Cloke nailed three majors for the Maine. His second was one of the day’s best when he curled a shot home from the edge of a pack. But he also finished the half with three behinds, one from a gettable set shot. James O’Brien, Kalan Huntly and Brian Mustafa kept driving the Magpies into attack. The Bulldogs stayed in touch as David Symons, pacy Tom Toma, Lachlan Ryan, hard-working James Sullivan and Shaun Young, with a perfectly timed toe poke, reduced the Pies’ lead to seven points. Golden Square then flipped their half-time deficit into a 34-point lead by the last break. Corey Jones and Ryan Herring nailed three goals apiece with Herring finding regular Castlemaine spearhead Mark Ramsey by his side in the goal square. Brayden Dorrington, who was a dasher off his halfback flank all match, demonstrated his top foot skills as he set up Jones’ second major with a spot-on pass across centrefield. Then Dorrington combined with Jacob Greenwood to find Jones for another goal as the Dogs raced away from the Maine. Close to siren time Ramsey got one back on Herring as the Square key forward conceded a 50m penalty and Ramsey threaded Maine’s ninth goal with just three seconds left to play. The last quarter was merely a formality with each club adding two goals. A long kick from Jones found teammate Travis Baird who was on target after yet another 50m penalty was invoked. Cloke, who’d been well held by Dale Young, handballed adroitly to Chris McKnight and he slid home Castlemaine’s 11th and last goal of the day. Square coach Nick Carter said the playing group had “taken it upon themselves to say the first half hadn’t been good enough and they needed to step up”. “In the third quarter we started to win the inside contests and also started using the ball in a much better way.” Carter added his vice-captain Jack Geary, who was the senior team runner on Saturday, had suffered “a four-week injury” and believed he’d be right to play in the upcoming split round.

AROUND the grounds and Sandhurst stitched up third spot on the Bendigo FNL ladder with a 27-point win over main rivals Eaglehawk. The Hawks needed to beat another club above them on the ladder to secure a Top Three spot – but fell short. And Kangaroo Flat continued their topsy-turvy season losing down at Gisborne to a club which went into the ninth round with just a solitary win. The Gardiner Reserve Bulldogs stitched up their 14-point victory with a six-goal to three first quarter, a deficit which the Roos never made up. The Flat loss, and a big 70-point win to Kyneton over cellar dweller Maryborough, meant once again Kyneton and Kangaroo Flat swapped places. The Tigers are again in the top five while the Roos languish – once more – in sixth berth. Plus Kyneton significantly bolstered its percentage, which could prove to be a key factor for a finals place come the end of August. Final scores, with the holiday Monday clash in the league’s indigenous round between Strath Storm and South Bendigo still to be played. The Storm and the Bloods will be competing for the Dja Dja Wurrung clan’s Wirama Shield. Sandhurst 16.17 (113) def. Eaglehawk 13.8 (86), Kyneton 22.19 (151) def. Maryborough 11.15 (81) and Gisborne 17.14 (116) def. Kangaroo Flat 15.12 (102).