The Subiaco team of 2015 doesn’t look a lot like the line-up that won the 2014 premiership but this lot of Lions is heading in the same pride filled direction. Meanwhile seven teams are seriously in the hunt for the other spots in the top five.

A wild wind made things difficult at Leederville Oval in the first half and then rain made it worse in the third quarter. Subiaco slipped way from a gallant Swan Districts in the second quarter and controlled things after that. Chris Deluca wasn’t bothered by the weather and kicked three goals, Leigh Kitchen and Chris Phelan were strong in the midfield along with former Swan Brett Robinson while Tom Smith did some remarkable things in defence. Swan Nathan Blakey won a spirited ruck battle with David Madut, Tony Notte and Nathan Broad were excellent defenders, Matt Rogers kicked two inspirational goals in the third quarter that raised hope for Swan Districts and Aaron Elari was a tireless performer.

Peel bounced back into form with a rare win at Fremantle Oval. Led by Tendai Mzungu, Thunder had too much talent for the home team with young midfielders Lachie Weller and Connor Blakey in fine form, Jonothan Griffin controlling the ruck and Tom Vandeleur and Craig Moller each kicking three goals. Kyle Hams was South’s best player and Jarrod Parry also impressed.

The Tigers are back in town. Conditions aren’t too good at the Showgrounds at the best of times and goals were hard to find – especially for East Perth. Ryan Neates and Keifer Yu were at it again for Claremont, Matt Davies had a good game and Francis Watson gave indications of his talent. Stephen Payne and young defender Tom Barrass were the best for disappointing Royals. 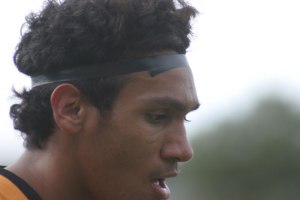 There was no need for heroic comebacks from the Falcons this week as they settled for a more conventional victory over East Fremantle up at Arena Joondalup. West Perth slipped into second spot and are beginning to look like real contenders. Chris Keunen again showed his worth in the ruck, Aidan Lynch kicked three goals, Luke Tedesco was strong in defence and Aaron Black was again influential in the midfield. The Sharks are becoming hard to read. George Hampson was clever in attack, Liam Anthony ran hard and Sam Read did his job in the back line.