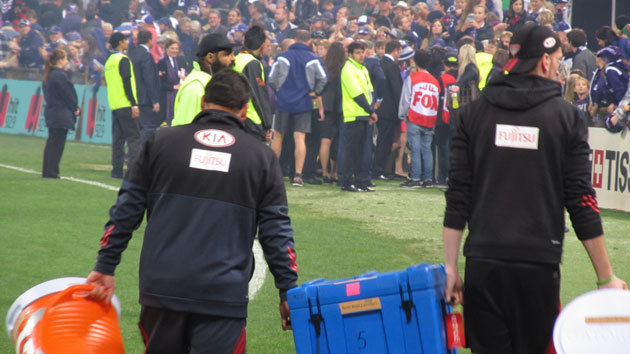 The Bombers were the latest team sent packing from Subiaco Oval by the Dockers. Fremantle are on top but no one at the Port is getting carried away.

The Dockers have won their first six games and sit two games clear on top of the AFL ladder. You’d think there would be a bit of a strut going on around the port city but it’s not quite like that. The fans are doing their share of muttering, some players are dissatisfied and the coaches, as coaches admittedly always do, can see areas for improvement.

The fans are worried about the fadeouts. The Dockers didn’t score a goal in the last quarter on Saturday night against Essendon; they appeared to go home at half time of the derby, were comprehensively outplayed in the third quarter of the Sydney game and outscored in the last. Fremantle has a 50% record in last quarters in 2015. They have won 16 quarters, lost seven and drawn one.
I watched Nathan Fyfe closely at Subiaco Oval on Saturday night and can tell you he’s not happy. He missed two set shots for goal against the Bombers. After he missed two in the first quarter of the 2013 Grand Final he vowed to improve this area of his game and it was better in 2014. In 2015 he’s improved every other aspect of his game but set shots remain an issue. Fyfe did a lot of muttering on Saturday night, you may have heard a commentator or two mention he’s ‘arguably the best player in the competition’ but he’s far from self-satisfied.

Michael Walters isn’t in form yet. Photos by Les Everett

Michael Walters made a remarkable return to football late last year after missing most of the season with injury but he’s not in form in 2015. He’s misfiring and he’s getting frustrated, trying to duck through tackles and holding on to the ball too long. At his best he’s in the top five players in the team but is not at his best. Yet.

Hayden Ballantyne is not in his All Australian form and the two-game suspension didn’t help. There were signs in the Essendon game. A couple of nice goals and a couple of those, ‘where did he come from?’ tackles. It’s building.
Michael Johnson finished 2014 in pain and had back surgery over the summer. He’s still slotting into the right spots but his kicking is a little off in 2015. History says he will improve.

Fremantle can get better.